THAM LUANG CAVE, Thailand - Thai authorities on Sunday said they plan to evacuate an area around a cave in northern Thailand where a dozen boys and their football coach have been trapped so that a "rescue operation" can take place.

The announcement came as dark monsoon rainclouds loomed over the mountainous north of the country early on Sunday, potentially heightening risks at the cave where rescuers were still waging a "war with water and time" to save the 12 trapped boys and their assistant coach.

The boys, aged between 11 and 16, went missing with the 25-year-old chaperone after football practice on June 23 as they set out to explore the Tham Luang cave complex in a forest park near the border with Myanmar.

"Assessing the situation now, it is necessary to evacuate the area for the rescue operation," said Mae Sai police commander Komsan Sa-ardluan over a loudspeaker. "Those unrelated to the rescue operation, please evacuate the area immediately." A large media contingent began packing up equipment including tripods and cameras, and moving down a muddy hill away from the mouth of the limestone cave.

Following a relatively dry spell, fresh torrential downpours could pose a setback to rescuers who have struggled to drain the Tham Luang cave complex in the northern province of Chiang Rai. 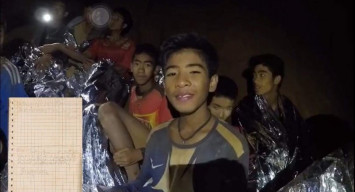 Weather.com forecast sustained thunderstorms lasting through Sunday and Monday, with further stormy weather expected for around the next two weeks.

Narongsak Osottanakorn, a former provincial governor leading the effort said the "ideal time" for a rescue could come in the next two or three days.

"We're still at war with water and time," he told reporters.

Gong Hui, a Chinese diver involved in the operation that has drawn some 130 Thai and international divers, told Reuters on Saturday before the fresh rains that water levels in the cave had "receded a lot" after sustained pumping had removed millions of litres of water.

Time is running out on a plan to teach the boys - some as young as 11 and not strong swimmers - to make a dive through dark, narrow passageways sometimes no more than two-feet (0.6- meter) wide, that have challenged some of the world's leading cave divers.

A former member of Thailand's elite navy SEAL unit died during a dive on Thursday night, a grim turn in what began two weeks ago as an outing to celebrate the birthday of one of the boys.

Up on the hill, where rescuers are seeking alternative routes down into the cave, another accident occurred when a vehicle skidded off a dirt track, seriously injuring several people, authorities said.

Earlier at the sprawling cave mouth, lines of frogmen and soldiers with flashlights could be seen emerging from the darkness, as generators chugged and pumped water out through plastic pipes.

Dozens of Royal Thai Army soldiers were seen resting on rocks outside the cave.

Billionaire entrepreneur Elon Musk tweeted that a team from his rocket company SpaceX in Los Angeles is building a mini-sub to help with the rescue.

"Got more great feedback from Thailand. Primary path is basically a tiny, kid-size submarine ... Light enough to be carried by 2 divers, small enough to get through narrow gaps. Extremely robust," Musk tweeted, adding that it would take eight hours to construct and 17 hours to transport to Thailand.

The Thai defence ministry said a team from a Musk firm with drilling and exploration know-how should reach the cave on Sunday.