Beds are seen as the Thai government prepares to convert an air cargo warehouse into a Covid-19 field hospital at Don Mueang International Airport in Bangkok, Thailand on July 28, 2021.

BANGKOK - Thailand on Sunday (Aug 1) extended tighter containment measures in the capital and high-risk provinces probably until the end of August in a bid to slow the spread of Covid-19 as the country deals with its biggest outbreak to date.

Thailand reported 18,027 infections and 133 deaths on Sunday, bringing the cumulative total to 615,314 cases and 4,990 fatalities, mostly from an outbreak since April that is being fuelled by the highly transmissible Alpha and Delta variants.

The restrictions, including travel curbs, mall closures and curfews, will be expanded to 29 provinces classified as "dark red zone" from 13, Apisamai Srirangsan, spokeswoman for the government's Covid-19 task force, told a televised news briefing.

The measures will start on Tuesday for 14 days and will be reviewed on Aug 18, she said.

"If the situation does not improve and is still worrying, the curbs will be extended to Aug 31," she added.

Earlier on Sunday, government sources said the curbs would continue until the end of the month.

The number of infections in the provinces is now higher than in Bangkok, so containment measures have to be tightened to curb the spread, Apisamai said. 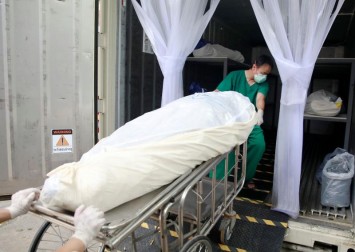 Restaurants in shopping malls will be allowed to open only for deliveries, while construction camps can also resume under "bubble and seal" measures, Apisamai said.

Last month, the government called on people to follow the restrictions, warning without cooperation record daily could reach 30,000 under a worst-case scenario.

The curbs have hit economic activity, and the finance ministry on Thursday slashed its 2021 economic growth forecast to 1.3 per cent from 2.3 per cent seen earlier.

Thailand started its mass vaccination drive in June and aims to inoculate 50 million people by the end of the year. But so far, only 5.8 per cent of its more than 66 million population are fully vaccinated, while about 21 per cent have received at least one dose.