The jailed protesters had broken traditional taboos by criticising King Maha Vajiralongkorn, risking prosecution under a strict lese majeste law that makes insulting or defaming the king, queen, heir and regent punishable by up to 15 years in prison.

The three denied all charges, but the court rejected their bail request on the grounds they could re-offend, one of their lawyers, Krisadang Nutcharat told Reuters, adding their trials were set for March 15.

Chanchai Chalanonniwat, deputy spokesman for the Office of the Attorney General, named the three among 18 protesters indicted on Monday (March 15)

The rest were indicted for sedition, breaching a ban on public assembly and related charges and were freed on bail, according to a document from the court. 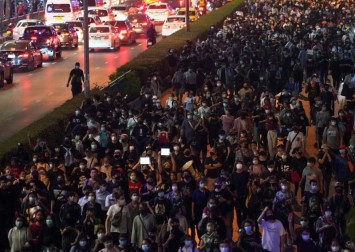 Prior to the court’s decision, Panupong said his group was unfazed by the prospect of jail.

“The activities we have done are only the beginning, and it will go ahead even without us,” he said.

Thailand’s youth movement has posed the biggest challenge so far to Prime Minister and former coup leader Prayuth Chan-ocha, who they say engineered the rules of the 2019 election to keep himself in power. Prayuth’s government rejects that.

Protesters also say the constitution gives the king too much power and demand that some of it be curbed. The palace has declined to comment on the protests.

Four other activist leaders are in jail awaiting trial over the Sept. 19 protest, having been denied bail five times.