BANGKOK - Thailand on Saturday raised the shipwreck that killed 47 Chinese tourists in July, part of an ongoing investigation into the cause of the boat capsizing, officials said.

"The Phoenix is an important piece of evidence to determine the cause of the accident," Tourist Police Bureau Deputy Chief, Major General Surachate Hakparn, told reporters.

"When the case is final, it will be able to restore Chinese tourist confidence," he said separately in a statement.

The Phoenix went down in high seas in July off Thailand's west-coast island of Phuket with 101 people on board, made up of 12 crew members and 89 tourists, all but two of them from China. The ship had been taking the passengers on an outing to a small island for snorkeling.

An earlier salvage effort was suspended due to weather conditions.

The capsizing and sinking of the Phoenix was Thailand's worst tourist-related disaster in years and led to a sharp drop in Chinese arrivals in the following months.

Tourists from China make up the biggest portion of Thailand's visitors, and last year accounted for nearly one-third of a record 35.38 million arrivals. 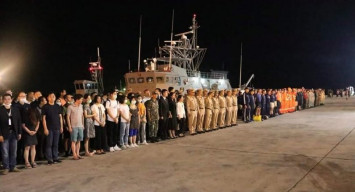 Tourism accounts for about 12 per cent of Southeast Asia's second-largest economy, making it a key driver of its growth.

The Thai government has scrambled to restore tourism with schemes such as granting waivers on visa fees.

"We want to get to the truth (about the Phoenix)," Surachate said. The effort shows a commitment to the relatives of the dead and will help restore tourism confidence in Thailand, he said