DENPASAR, Indonesia - Two Thai women and a Frenchman could face the death penalty after they were caught smuggling drugs into Bali, the Indonesian holiday island's customs agency said on Monday (Oct 21).

The Thai nationals - identified as Kasarin Khamkhao and Sanicha Maneetes - arrived last week on a flight from Bangkok and suspicious airport officials found nearly a kilogramme of methamphetamine hidden under their clothes, authorities said.

The pair - a janitor and an operator of a motorcycle rental shop in Thailand - could face a firing squad if convicted in the Muslim majority nation, which has some of the world's toughest drug laws. 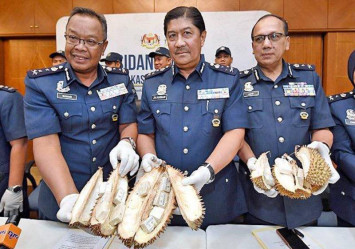 Separately, Frenchman Olivier Jover was arrested in Bali after a package sent from his home country containing some 22.5g of cocaine arrived at the airport with his address on it, according to authorities.

He faces a long jail term or the death penalty, authorities said.

Russian beautician Tatiana Firsova, who allegedly tried to smuggle in 6.6g of cocaine, was arrested after arriving in Bali on a flight from Doha last week. She faces up to 15 years if convicted.

The four suspects, wearing orange prison jumpsuits, were paraded together in front of reporters on Monday - a common practice in Indonesia.

The arrests come as two Thai men were sentenced last week to 16 years in prison each after they were found guilty of smuggling 1kg of methamphetamine that they had swallowed.

While death sentences are often reduced to long jail terms, Indonesia has executed foreign nationals in the past, including two Australian masterminds of the Bali Nine heroin gang who were shot in 2015.