'They're using Covid-19 as a joke': Influencers in Bali may be deported for painted face mask prank

They might have called it a prank, but no one was laughing.

For tricking a security guard at a supermarket with a mask drawn on with face paint last Friday (April 16), a pair of foreign influencers residing in Bali had their passports seized by authorities on Thursday.

The two — a female Russian national and a male Taiwanese national — will be questioned by the Public Order Agency today (April 23), a spokesman from the regional office for the Ministry of Law and Human Rights told the media.

"After that, they will be examined together with Immigration to take the decision on whether or not to deport them," he added.

The head of the Public Order Agency said they will issue a recommendation letter to the Immigration authorities, requesting for the pair to be deported.

He criticised the actions of the two: "Their actions have injured efforts to enforce health protocols."

This comes after the pair sparked massive online backlash for their viral stunt video. 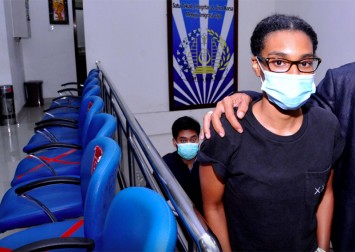 The video, uploaded onto the male influencer's Facebook page, showed the pair attempting to enter a supermarket without a face mask.

After a security guard turned them away, they paint a mask onto the female influencer's face. They then return to the supermarket and filmed themselves walking about the premises, joking about how no one seemed to have noticed what they were doing.

The video has since been removed from the male influencer's page. Both their Instagram accounts have been made private at the time of writing.

"These two people don't have empathy, they're using Covid-19 as a joke," slammed Niluh Djelantik, a Balinese designer and politician on Instagram. "Don't let them step on Bali's dignity."

Netizens lambasted the pair for making light of the Covid-19 situation in the country, which has seen 1.63 million cases and left over 44,000 dead.

As of April 13, Indonesia has a total of 10 districts and cities located within red zones — areas with high risks of transmission — five of which are within Bali itself.

In a bid to curb the spread of the virus, Bali has a mandatory mask rule. Failure to comply would result in a fine of IDR1 million (S$91) for first-time offences. Repeat offenders may be subjected to being deported.