Three action-packed bouts kick Off ONE: HEROES OF HONOR 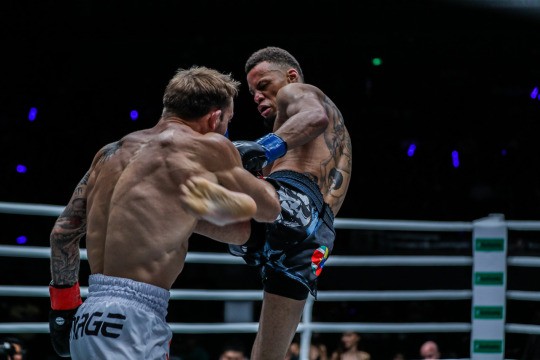 ONE: HEROES OF HONOR kicked off with three action-packed preliminary card bouts, which had the Filipino fans at the Mall Of Asia Arena in Manila on their feet.

There were a pair of thrilling mixed martial arts contests, as well as the first-ever kickboxing bout in ONE Super Series. Take a look at what went down.

The first-ever ONE Super Series bout came with a lot of anticipation, and it lived up to every bit. Given the accomplishments and skills of both New Zealand’s Brad “Quake” Riddell and The Netherland’s Regian “The Immortal” Eersel, that is not a surprise.

The kickboxers went back-and-forth for three hard-fought rounds of action, but it was Eersel who snatched the decision win.

“Quake” started off the stronger man, blasting his way in close through the reach deficit with hard boxing combinations. He fired fierce left hooks to the head and body, and was never content with single shots. Eersel did not manage to come alive in round one, as Riddell pressured constantly.

His moniker of “The Immortal” rang true, as the Netherlands athlete came out renewed in round two, and with a different tact. Riddell maintained his pressure with punches, but Eersel deftly aimed his knees at the midsection of his opponent. A left hook made the Kiwi wince, and a left knee sent him crashing to the canvas.

Riddell had to draw it back in his favor during the third, and he tried his best. Ferociously attacking with heavy hands, he continued to look for the finish, but Eersel’s knees were now in full flow, and they kept the shorter man at bay. In an even round, it would need the judges to separate them.

Ultimately, Eersel got the unanimous nod, and will be remembered as the first ever ONE Super Series victor. Riddell came up short, but played his part in a great contest.

Gina “Conviction” Iniong was the first hometown hero to make the walk. She received a rapturous applause in Manila, as she went toe-to-toe with Chinese Taiwan’s Jenny “Lady GoGo” Huang.

It was desire and grit that kept Huang in the contest until the end. However, the Filipina had controlled both the striking and grappling, earning a decisive unanimous decision win.

Team Lakay’s Iniong showcased her wushu prowess in the first stanza, peppering “Lady GoGo” with low kicks and hard punches. Huang was beaten to the punch, but that did not deter her. The former atomweight world title challenger continued to press forward towards her opponent in the hope of landing her own shots.

As they came out for the second, the vibe was much the same, with the judoka walking forward recklessly, aiming at Iniong’s chin with wild punches. “Conviction” maintained her composure, and she landed cleanly. She further cemented her status as the frontrunner with a takedown and superb ground control in the latter part of the round.

This continued in the third, with Iniong quickly taking Huang down — impressive considering her judo black belt resume — and then dominating with a savvy top game and regular salvos of both hands and elbows.

Iniong got back to her winning ways. She bounces back from a tough loss to Mei Yamaguchi back in November, and elevates her record to 7-3.

In a night of firsts, Indonesia’s Adrian “Papua Badboy” Mattheis met China’s Lan Ming Qiang, and opened the show in the ONE Championship ring for the very first time.

The strawweight athletes battled for the full 15 minutes, showcasing every aspect of martial arts, but it was Mattheis whose game proved to be superior, as he used wrestling and ground strikes to secure a decision victory.

Both men threw with purpose to start the first stanza. Despite Lan instigating the grappling exchange, he ultimately came off much worse, as his Indonesian foe took a dominant position and landed punishing strikes throughout.

The Chinese combatant endured under pressure, and he always looked for an escape, but he could only show his durability by holding on in the face of an onslaught.

Lan was able to have much more success in the second round, as Mattheis seemed willing to engage in a stand-up battle. The pair went toe-to-toe, both putting on a show for the Manila fans, and also displaying unbelievable heart.

“Papua Badboy” opted to switch tact with a takedown, and dominated the remainder of the round from there. But again, Lan displayed his toughness to work through some bad spots.

Despite having spent much of the contest on his back eating punches and elbows, Lan would not quit. He showed his spirit at the start of the final round, and threw accurate punches at Mattheis.

The Indonesian, however, stayed true to the game plan that had given him so much success already, and he saw out the victory with more takedowns and a smothering top game.

Mattheis picks up his third straight victory to move to 6-4, amazing considering it comes off the back of a three-fight skid. He continues to improve, and is becoming more of a threat in a stacked strawweight division.