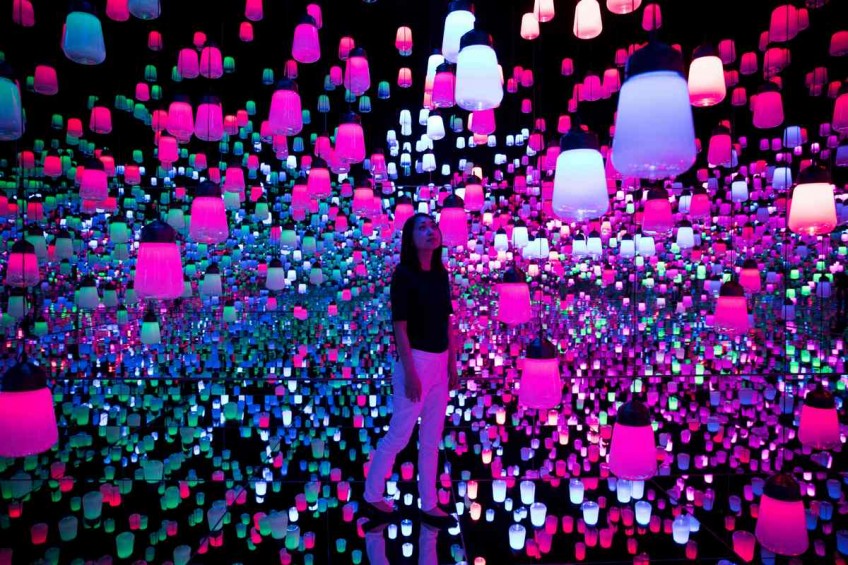 The waterfall appears to run down the wall of a room and across the floor, but the flow is an illusion -- a digital exhibit at a new interactive museum in Tokyo.

The flower-filled waterfall is the work of Japanese collective teamLab, known internationally for their innovative "digital art" that combines projections, sound and carefully designed spaces to create other-worldly, immersive experiences.

After exhibitions around the world, they are opening this summer a museum dedicated entirely to their unique brand of artwork.

The space is being billed as a first, a digital museum with artwork that envelopes and interacts with visitors.

One space features a bucolic rice field, another is filled with seemingly endless hanging lamps that illuminate as the visitor nears, the light moving from one lamp to another around the room.

Elsewhere, a waterfall filled with flowers appears to flow over a hill or waves crash along the walls, throwing spray towards the ceiling.

The exhibits are designed to flow into one another and interact with each other and the viewer. Some follow visitors or react in different ways when they are touched.

"We have created a borderless world made up of pieces of artwork that move by themselves, communicate with each other and mix perfectly with others," teamLab co-founder Toshiyuki Inoko, 41, told AFP.

"I would like this space to become a place where we can remember that borders do not exist in our world," he said.

Some exhibits also encourage visitor participation -- in one, viewers are "propelled into space" by bouncing on a trampoline in the midst of an intergalactic projection, in another they can dance in unison with performers who appear as translucent silhouettes.

Inoko, who has a background in physics, founded teamLab in 2001 with four fellow Tokyo University students, but the collective didn't make its artistic debut until 2011, with a show at a gallery in Taipei.

Since then, they have shown across the world, with exhibitions in London, Silicon Valley, China and elsewhere and the collective has grown to some 500 members.

They describe themselves as "ultratechnologists", who combine expertise in speciality fields, including engineering, robotics and architecture, with hands-on manual labour to produce art.

While teamLab works are now in several permanent collections, the new museum will be the first permanent space completely devoted to the collective's pieces.

The cost of the project has not been disclosed, but a team member told AFP that each piece of artwork can cost around $1-2 million.

The collective will have some 50 exhibits in the 10,000-square-metre space in the bayside Odaiba area of Tokyo.

They have partnered with property management company Mori Building, and secured support from Japanese companies ranging from Panasonic to Epson.

Maintaining the artwork requires a bank of 520 computers and 470 projectors, but the real key is the set of sophisticated algorithms that generates images in real time.

The artworks are "neither pre-recorded animations nor images on loop," says teamLab.

The collective say they want to use digital technology to "expand the beautiful".

"Unlike a physical painting on a canvas, the non-material digital technology can liberate art," they say in an explanation of their work.

"Because of its ability to transform itself freely, it can transcend boundaries."

"The fact that the universe transforms with the presence of the other is very important for us," Inoko told AFP.

"I am as much a part of the artwork as the other visitors," he said.