Trump thinks summit will 'work out nicely'; meeting to begin with 1-on-1 session

SINGAPORE - Donald Trump and Kim Jong Un were making last-minute preparations Monday on the eve of their historic summit, as officials scrambled to narrow yawning differences over Pyongyang's nuclear arsenal.

Tuesday's meeting will be the first time a serving US president has sat down with the leader of North Korea, and comes just months after fears of conflict soared as the two traded personal insults and threats of war. "I just think it's going to work out very nicely," said Trump at a working lunch with the prime minister of Singapore, where the meeting is being held.

Behind the scenes, officials held talks for nearly three hours at a neutral hotel, seeking to bridge gaps over "denuclearisation", which means vastly different things to the two parties. 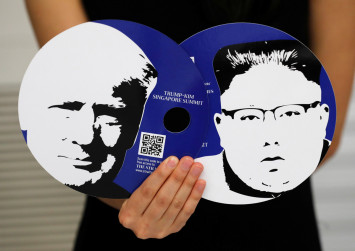 The diplomacy is an extraordinary turnaround from last year, when Trump threatened the North with "fire and fury" and Kim dubbed him a "mentally deranged US dotard".

The summit has also raised hopes of progress towards a peace treaty to formally end the Korean War, the last festering legacy of the Cold War, after hostilities only stopped with an armistice.

The two men will first meet one-on-one in a closed session, before a larger meeting with key advisers, US officials said. A senior White House official said

Trump was "feeling good" and that the summit was open-ended. "It could be two days. They will talk for as long as they need to," said the official, who asked to remain anonymous.

Trump lands in Singapore for meeting with North Korea's Kim

Pyongyang is demanding as yet unspecified security guarantees and the end of what it calls a "hostile policy" towards it, and has not made clear what concessions it is offering over the nuclear arsenal it calls its "treasured sword" to defend against a US invasion.

Washington is demanding the North give up its weapons in complete, verifiable and irreversible way (CVID), while Pyongyang has so far only made public pledges of a commitment to the denuclearisation of the peninsula - a term open to wide interpretation.

The North, which has been subjected to increasingly strict sanctions by the UN Security Council and others, has made promises of change in the past, such as at the lengthy Six Party Talks process, only for the agreements to collapse later.

The US leader has whipsawed on expectations for the meeting, signalling that it could be the beginning of a "process" of several meetings, only to call it a "one-time shot" for peace as he embarked for Singapore.

He would know "within the first minute" whether an agreement would be possible, he added, as some analysts warned that it risks becoming more of a media circus than an occasion for substantial progress.

Singapore summit with something that looks remarkably like the Six Party Talks or anything that the president has previously criticised but it is hyped as something that's historic and new and groundbreaking," he added.

Heavy security and armed police were in place at summit-related venues across the city-state. Outside the Istana, the presidential palace where Trump met Singaporean Prime Minister Lee Hsien Loong, well-wishers displayed American flags and a boy held up a sign reading: "I love President Trump!"

The North's official KCNA news agency called the summit "historic", saying it would take place in a "changed era" and "under the great attention and expectation of the whole world". Kim would exchange "wide-ranging and profound views" on issues including "building a permanent and durable peace-keeping mechanism on the Korean peninsula" and "realising the denuclearisation of the Korean peninsula", it added.

It formally referred to Trump by his full name in the Monday report, including his middle initial - the first time it has done so. A White House official described the North Korean reporting as "a sign for optimism".

The Rodong Sinmun newspaper, the mouthpiece of the ruling Workers' Party, devoted its first two pages and 16 photos to Kim's trip, including images of him boarding an Air China Boeing 747 for the journey. 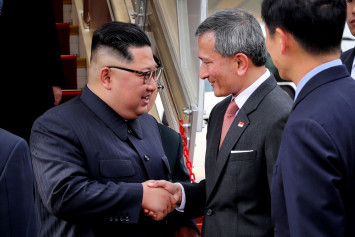 His sister and close aide Kim Yo Jong is also in Singapore, and is believed to have travelled separately on the ageing Soviet-made Ilyushin-62 that is Kim's personal aircraft.

US presidents and vice-presidents generally never fly on the same aircraft to guarantee that one of them survives in the event of a disaster, and the move appeared designed to ensure the preservation of the Kim dynasty, which has ruled the North for three generations.