TOKYO - An elderly driver drove her vehicle into a group of children in western Japan on Thursday (June 13), police said, the latest in a string of similar, often fatal, car accidents caused by old drivers.

Two children were injured when 69-year-old Rieko Ueda ploughed her car into a group of children from a local nursery facility in Nishinomiya city shortly before 10am, a police spokesman told AFP.

A six-year-old girl was conscious when she was taken to a hospital, but the scale of her injury was not immediately available, the spokesman said.

Local media said she had broken her shoulder bone.

A five-year-old girl was also taken to a hospital for a minor injury, the spokesman added. 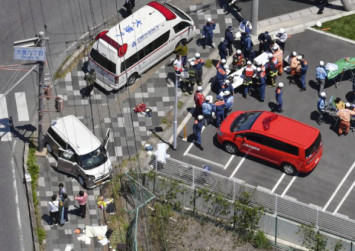 "The cause of the accident is under investigation," he said, adding that police had arrested the driver.

The case is the latest in a string of accidents involving elderly drivers, as Japan continues to grapple with problems relating to its ageing society.

In April, an 87-year-old motorist drove into a pedestrian crossing at high speed in Tokyo, killing a 31-year-old mother and her three-year-old daughter, and injuring several others.

As recently as June 4, an 81-year-old driver in the south-western city of Fukuoka drove down the wrong side of a major street at high speed, crashing into several vehicles.

In that accident, the driver and his 76-year-old wife died inside the vehicle, while several other motorists and pedestrians suffered injuries.