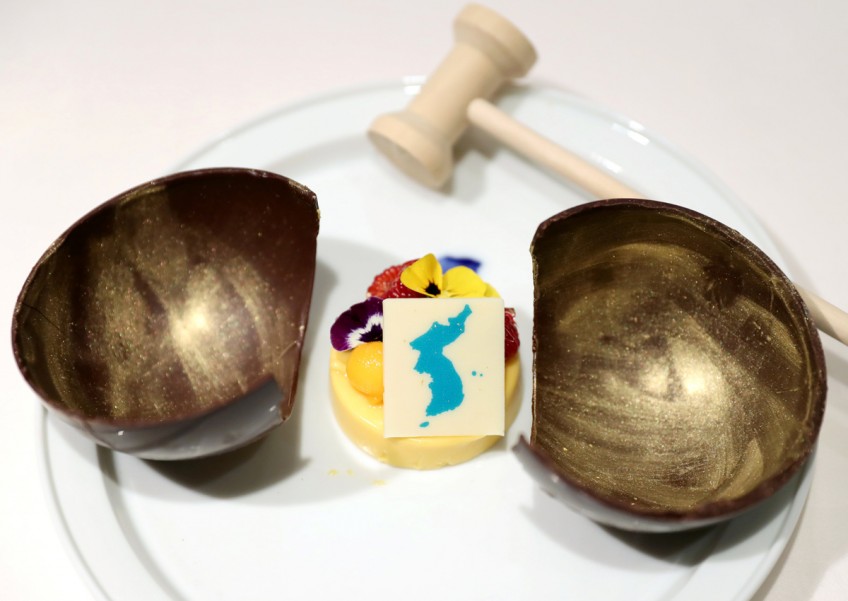 TOKYO - Japan has demanded that South Korea rethink a mango mousse dessert it plans to serve at a North-South summit dinner on Friday which features a map of the Korean peninsula, including islands disputed with Japan, a recurring irritant for Tokyo.

The mousse, subtitled "Spring of the People" in a publicity photo, features islands known as Takeshima in Japan and Dokdo in Korea, which lie about halfway between the East Asian neighbours in the Sea of Japan, which Seoul refers to as the East Sea.

"It is extremely regrettable," a Japanese Foreign Ministry spokeswoman said on Wednesday, adding that Japan had lodged a protest. "We have asked that the dessert not be served."

Japan complained to South Korea about fans waving a flag with a similar design at a friendly women's ice hockey match at the Winter Paralympics between the combined North and South Korean team and Sweden in March.

Relations between the two Koreas and Japan have long been strained by territorial disputes and lingering resentment over Japanese colonisation of the Korean peninsula in the first half of last century.

Japan in the past has also protested against the erection of statues commemorating Korean women and girls forced to work in Japanese military brothels during World War Two. Seoul says that Tokyo has yet to deliver a heartfelt apology for its wartime actions.

But Moon and Japanese Prime Minister Shinzo Abe have vowed to present a united front and exert pressure on North Korea to abandon its nuclear and missile programs, which it pursues in defiance of UN Security Council resolutions.

The North-South summit at the border truce village of Panmunjom is set to be followed by a meeting between Kim and US President Donald Trump in May or June.