HONG KONG - A dozen members of the United States Congress have nominated Hong Kong's pro-democracy movement, and its most prominent student leader, Joshua Wong, for this year's Nobel Peace Prize, a move that is certain to provoke anger from Beijing.

In nominating Wong, 21, and his colleagues Nathan Law, 24, and Alex Chow, 27, who led tens of thousands in the former British colony's largest pro-democracy protest in 2014, the lawmakers wanted to recognise "their peaceful efforts to bring political reform and self-determination to Hong Kong".

The protests, which the Chinese and Hong Kong governments deemed illegal, were part of a populist uprising that posed one of the greatest challenges to Beijing in decades.

The reference to self-determination is certain to rile authorities in Beijing and Hong Kong, who say the notion is inconsistent with the principle of "one country, two systems"under which the Asian financial hub is governed.

"Hong Kong's pro-democracy advocates have made significant contributions to peace by actively seeking to safeguard the future of Hong Kong at precisely the time that Beijing has taken steps to undermine Hong Kong's long-cherished autonomy," four Democrats and eight Republicans, including former presidential hopeful Marco Rubio, told the Nobel Peace Prize Committee in a letter. 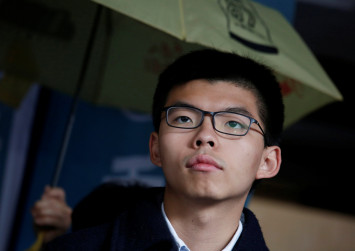 If Wong wins, he would be the second youngest person to receive a Nobel Prize after Pakistan's Malala Yousafzai, who was 17 when she became a laureate in 2014. The winner will be announced in October.

Since Britain handed Hong Kong back to China in 1997, it has been ruled under the "one country, two systems" principle, which promises it a high degree of autonomy and freedoms not enjoyed in China.

Tens of thousands of protesters, some wielding umbrellas to shield themselves from tear gas and pepper spray, set up camp on major highways for 79 days in late 2014, demonstrations that grabbed international headlines.

But the mostly peaceful protests failed to pressure Hong Kong and Beijing authorities to grant the city full democracy.

Critics decry a series of subsequent "payback" incidents, including months-long jail terms for the trio and, most recently, a ban on Wong's ally, Agnes Chow, running in a legislature by-election.

Hong Kong authorities have denied political interference, saying everything was done in accordance with the law.

The nomination, including its nod to Wong's efforts to promote "self-determination", or a referendum to reconsider Hong Kong's political status, would provoke outrage from Beijing's Communist Party rulers who say the city is an inalienable part of China.

Wong, who faces two appeals over separate jail sentences, said he hoped the nomination would give more bargaining power to the city's democratic movement.

"I believe the nomination would show the international community and (Chinese President) Xi Jinping how the young generation will persist in fighting for democracy, even if we have to face imprisonment or a permanent ban from public office," Wong said.

His wife Liu Xia, said to suffer from severe depression, is still under effective house arrest.