HANOI - A Vietnamese-American man charged with "attempting to overthrow the state" will go on trial in Ho Chi Minh City on June 24, his family said, and could face the death penalty if found guilty.

Michael Nguyen has been held for nearly a year in the one-party communist state, which has tightened its grip on power since a new administration came to office in 2016 and took a harder line on dissent of any kind.

Nearly 130 prisoners of conscience are currently behind bars in the country, where independent media is banned and protests are illegal.

Nguyen was detained in July last year while travelling with two activists on a visit to Vietnam.

The father of four young daughters could face the death sentence if convicted.

His family said he has been denied access to lawyers during his detention and insisted he is innocent.

"He is severely disadvantaged and unable to properly defend against any accusations against him," said a statement from his family in the United States. 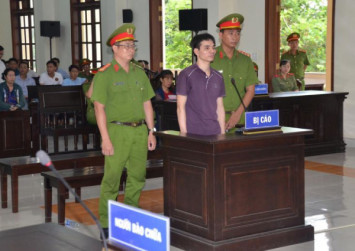 His trial is set for June 24-25 in the southern commercial hub of Ho Chi Minh City, his family and a lawyer said.

The two activists arrested with Nguyen - Huynh Duc Thanh Binh and Tran Long Phi - will also go on trial with him, along with Binh's father, who is accused of failing to report "criminal activity", said Binh's lawyer Nguyen Van Mieng.

"They were just simply in contact with each other, they didn't set up a political party, they didn't intend to try to replace the current party," the lawyer said.

A US State Department official said it was aware of reports that a US citizen has been detained since July 2018 and the safety of its citizens abroad is a top priority.

Michael Nguyen left Vietnam in 1975, settling in the US alongside more than a million people who fled when the communist regime took over after the long, bitter Vietnam War.

Many war refugees mobilised against the communist government from afar, but Nguyen's family have said he is not involved with any dissident groups.

Vietnam routinely jails its critics and is accused of tightening its grip on activism in recent years.

A cybersecurity law passed last year gives authorities unprecedented powers to police online content and has come under fire from the US, the European Union and the United Nations.

The Bill requires Internet companies like Facebook and Google to hand over user data and remove material from their sites when requested by the government.