Vietnam man turns girlfriend's funeral into a wedding with flowers, ring, and a love song 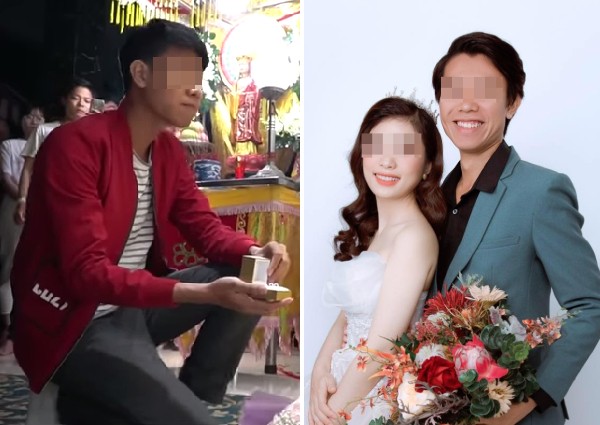 They had planned to walk down the aisle together but in a cruel twist of fate, a groom-to-be ended up having to attend his own fiancee's funeral.

Dang Thien An and his fiancee, known only as D, were just one month away from their wedding when she was killed in a motorcycle accident in Ho Chi Minh City on Sunday (Aug 25).

But Dang did not let death get in the way of his promises to D, turning her funeral into a makeshift wedding complete with flowers, a ring and a heart-rending song dedication.

The couple, both 25, had met and fallen in love while they were studying at Ho Chi Minh City University of Technology.

They had been working in Japan for the past two years but D returned to Vietnam a few months ago to prepare for their upcoming nuptials.

By unfortunate coincidence, Dang, who had remained in Japan for work, was scrolling through Facebook when he came across a livestream of the scene of a traffic accident in Vietnam and was alarmed to see his girlfriend's family mourning.

Reaching out to her family, he learnt that the tragic accident had claimed her life that morning.

Once he heard the news, Dang immediately booked a flight to Vietnam, reaching just in time for D's funeral on Sunday night.

"I want to do so many things for you, but today I can only do this," he said as he struggled to keep his composure.

"Someone told me that heaven had an important reason to call you home. I also think so. But there's no excuse for you not to wait for me. There are 32 days left to our wedding... "

In a makeshift wedding ceremony, Dang brought out the couple's wedding rings, placing D's ring in front of her picture and putting his on.

Holding a bouquet of flowers, Dang then serenaded D with the Mandarin ballad Tong Hua, his voice breaking with emotion. He had originally planned to sing the song to her at their wedding,

In a poignant reminder of the fleeting nature of life, Dang's mother Dang Thien Thanh, 61, said, "Just yesterday, D called An (Dang) to ask what to buy as her first gift for her mother-in-law. She already bought it for me, but the first gift is also the last gift…"