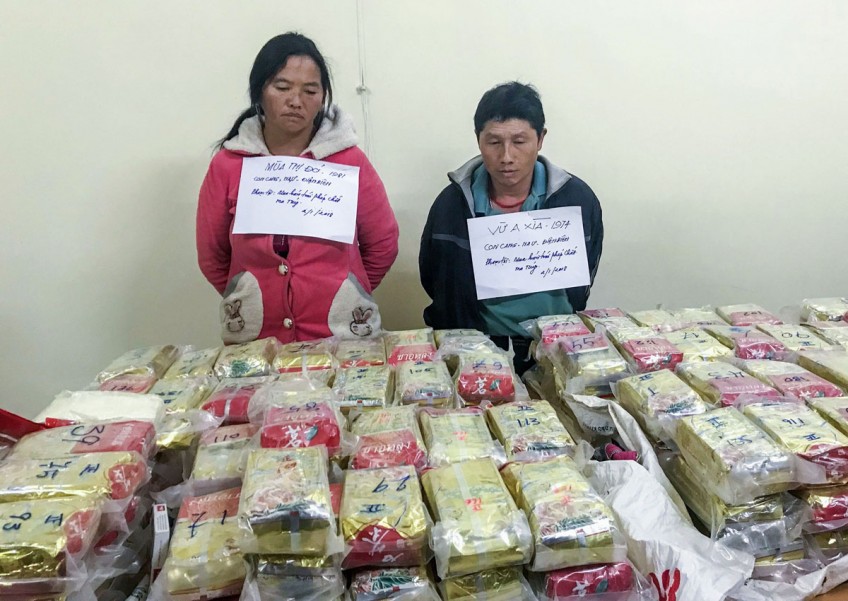 HANOI - Vietnamese cops have seized US$3 million (S$4 million) worth of heroin hidden inside packets of tea and smuggled from Laos, state media said Thursday (Jan 4), the largest recorded haul of the drug in the communist country.

Vietnam is a key transit point in the "Golden Triangle" drug trade, a region that cuts across parts of Laos, Thailand and Myanmar.

The area is the world's second-largest drug producing region and is awash with methamphetamine, opium and heroin - the refined product of poppies.

A police sting in the mountainous northern Vietnamese province of Dien Bien on Tuesday caught a man aged 44 and a woman in her late 30s, carrying 170 kilogrammes of heroin on the back of their motorbikes.

The drugs were smuggled over from Laos and packed into scores of packets of Thai branded tea, according to state-run police newspaper Cong An Nhan Dan.

The heroin was being transported through Vietnam to a third country, he added, without giving details.

Vietnam borders China - Asia's largest drug market - but also has a long coastline that is a gateway to Indonesia, the Philippines and Australia, which are all large markets for drugs.

Vietnam has some of the toughest anti-drug laws in the world which include capital punishment to drug convicts.

Anyone found guilty of possessing more than 600 grams of heroin, or more than 20 kilograms of opium can face the death penalty.

Golden Triangle drug labs are pumping out records number of meth pills and crystal meth - ice - and cascading them across Southeast Asia and as far as Europe and Australia, which has the world's highest per capita rate of ice addiction.

Myanmar is the heart of the meth trade. It also produces opium and heroin, as does neighbouring Laos, but the areas under poppy cultivation in both countries are slowly shrinking.