KUALA LUMPUR - Indonesia is moving towards a ban on child marriage, officials said on Tuesday (April 24) after a photo of a teenage couple who tried to tie the knot went viral on social media.

Indonesia, the world's most populous Muslim nation, is among 10 countries with the highest number of girls marrying before they turn 18, according to campaign group Girls Not Brides.

A photo of a 15-year-old boy and a girl, 14, trying to register their marriage on the island of Sulawesi has been shared widely online since last week, sparking renewed pressure on the government to end such underage unions.

President Joko Widodo has agreed to sign a decree that would ban child marriage, a spokeswoman at the Women Empowerment and Child Protection Ministry told the Thomson Reuters Foundation.

No other details were available immediately, but the spokeswoman said public dialogues on the matter would be held.

Read Also
Boy, 15 and girl, 14 get court approval to marry 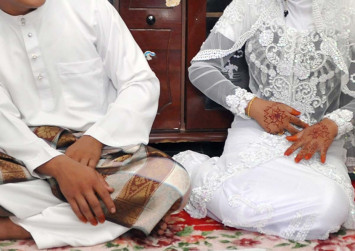 The ministry has been pressing the government to raise the minimum age for marriage to 20 for girls, and 22 for boys.

Under Indonesian laws, girls can marry at the age of 16, and 19 for boys if parents give their consent. Girls can be married at an even younger age if religious courts agree.

"Child marriage is a form of sexual violence," said Ninik Rahayu, one of the female Islamic clerics who jointly issued an unprecedented fatwa against child marriage last year.

A fatwa, or religious edict, is influential among Muslims although it is not legally binding.

"Child marriage has reached an emergency level in Indonesia. If we don't take action quick enough, it will destroy the future of our children," Rahayu told the Thomson Reuters Foundation.

Andreas Harsono from campaign group Human Rights Watch said the Indonesian government's pledge is "bold" but action must be taken without delay.

Campaigners say poverty and tradition continue to drive underage marriage in Indonesia, a sprawling archipelago in Southeast Asia with a population of 250 million people.

One in four girls marry before they turn 18 in Indonesia, according to the United Nations' children agency, Unicef. On average over 3,500 Indonesian girls are married off every day.

#Weddings and engagements #Children and Youth