Myanmar authorities and citizens leapt to the defence of Aung San Suu Kyi Tuesday after Amnesty International stripped her of its top award over indifference to atrocities committed against Rohingya Muslims, doubling down on support for the civilian leader in the face of global ire.

Suu Kyi's international reputation as a rights icon is in pieces and Amnesty's move is the latest in a string of rescinded accolades.

Canada revoked her honorary citizenship last month and the US Holocaust Museum in March took back an award named after concentration camp survivor Elie Wiesel.

Institutions that once showered Suu Kyi with titles are rapidly distancing themselves from a leader they argue is doing little in the face of alleged genocide and ethnic cleansing against its Rohingya minority.

Amnesty's "Ambassador of Conscience Award" was bestowed in 2009 and other recipients include Nelson Mandela, Malala Yousafzai and Ai Wei Wei.

"Today, we are profoundly dismayed that you no longer represent a symbol of hope, courage, and the undying defence of human rights," Amnesty International chief Kumi Naidoo said in a letter to Suu Kyi released by the group.

"Amnesty International cannot justify your continued status as a recipient of the Ambassador of Conscience award and so with great sadness we are hereby withdrawing it from you."

But domestically, Suu Kyi remains popular across vast swathes of Myanmar and within her party, the National League for Democracy, which won elections in 2015 ending decades of military-backed rule. 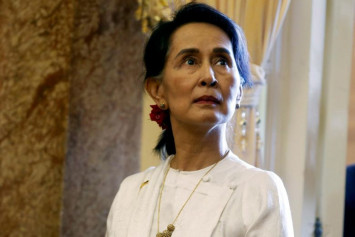 The stripping of awards not only harms the "dignity" of Suu Kyi, but also that of all NLD members, the party's spokesman Myo Nyunt told AFP, adding he thought this was all part of a wider conspiracy.

"All these organisations are working for the Bengalis who have left the country in order to get citizenship," he said, using a pejorative term for the Rohingya that is widely accepted in Myanmar and falsely implies they are illegal immigrants from Bangladesh.

Deputy Minister for Information Aung Hla Tun told AFP he was personally sad and disappointed by Amnesty's announcement and said Suu Kyi was being treated "unfairly".

Such moves would only "make the people love her more", he added.

People on the street in Yangon were defiant.

"Their withdrawal is pretty childish. It's like when children aren't getting along with each other and take back their toys," 50-year-old Khin Maung Aye said.

More than 720,000 Rohingya were driven over the border to Bangladesh in a crackdown that started in August 2017, and refugees have detailed horrific testimony of murder, rape, torture and arson.

The military says it was defending itself against Rohingya militants.

UN investigators have called for top generals to be prosecuted for genocide and accused Suu Kyi's government of complicity, though has stopped short of calling for her to be hauled before a court.

Suu Kyi became a democracy icon after spearheading the opposition movement to the feared military junta, which resulted in her spending some 15 years under house arrest before her release in 2010.

She has yet to comment on Amnesty's decision herself but has in the past shrugged off questions about withdrawn awards.

Calls to revoke Suu Kyi's 1991 Nobel Peace Prize have been rebuffed by the committee that oversees it.

Some think, however, that Amnesty's move will be taken more personally because she became a cause celebre for the rights group during her house arrest.

"This is effectively an excommunication of Suu Kyi from the pantheon of human rights champions," Yangon-based independent analyst David Mathieson said, adding that the decision would "sting".