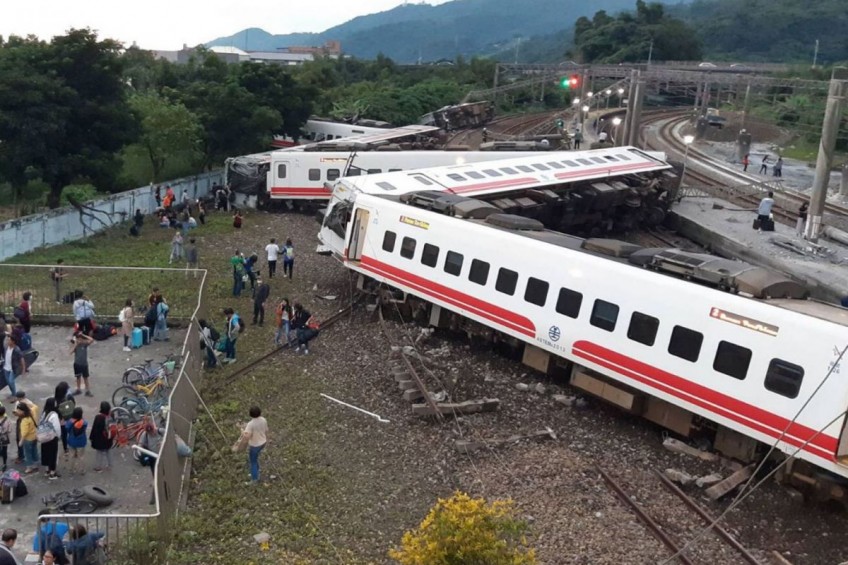 TAIPEI - The worst casualties in Taiwan's deadliest rail disaster in more than three decades were in four train cars which overturned, according to rescue workers who worked through the night to search for survivors in the ill-fated Puyuma Express No. 6432.

All eight cars of the express train ran off the tracks on a bend near the Xinma Station in Yilan county at 4.50pm on Sunday (Oct 21).

The Chinese-language United Daily News (UDN) reported that rescue workers found many body parts near the sixth train car. Some passengers were thrown out of the carriage.

Most survivors were on board the four cars which did not topple over.

As of 9.35 pm on Sunday, all 366 passengers onboard - including the dead and injured - had been evacuated or removed from the wreckage, the Taiwan Railways Administration said. At least 18 people died and 187 were injured.

Fifteen of the 18 casualties were in the first three cars, reported local media. Among those who died, the youngest was nine years old.

Two students aged 12 and 13 from a junior high school in Taitung - where the train was headed - were also killed, according to the transport ministry.

The victims include a family of eight who were returning home after attending a wedding in Taipei and a tour guide.

One lucky passenger, identified only by his surname Khoo, said he heard a loud crash before the car he was travelling in overturned. He broke the safety window and managed to get three other passengers out in time.

[embed]https://www.youtube.com/watch?v=QPZdQuQW_sY[/embed]"The world is turned upside down in three seconds," he was quoted as saying by UDN.

Mr Khoo, who was on his way home after attending a gathering of ex-classmates in Yilan, said that he suspected the poor design of the platform at the Xinma Station had contributed to the accident. He believed the train derailed after hitting the platform, adding that the train was going at high speed even as it was approaching a bend.

The cause of the derailment is still under investigation, but local media quoted several survivors who pointed to the high speed at which the train was travelling.

Passengers who survived the accident recalled how the train had been shaking intensely during the journey and was going "very fast" before it derailed, reported Agence France-Presse.

"The train stopped twice and we were told that there were problems that needed repair but the train restarted not long after," one passenger who identified herself as Mrs Chiu told reporters.

Another passenger Henry Tseng, who was onboard one of the overturned carriages, told Reuters: "The train was going very fast. I thought to myself: Why was it not slowing down on a curve?"

"I hit a wall when the car started to flip. Around five to six people were thrown out of the carriage door...There's no time to think about what happened. Everyone was in a rush to get out," said the 30-year-old. He suffered eye injuries.

Hundreds of rescuers and military personnel worked through the wreckage with spotlights on Sunday night in search of survivors.

Cranes were used to lift the battered train cars, some of which were lined in a zigzag pattern near the tracks.

"Check there, check there," several rescuers shouted while lifting a deformed car with a crane to look for survivors.

Some rescuers climbed onto the top of an overturned carriage which had hit a pole carrying electricity.

"It's terrifying. I really did not know how it happened. After a scene of terror, the train flipped, the seats were broken and suitcases were all over the place," a seventh-grader with the surname Yang told the news agency.

Among those who were seriously wounded in the accident was a rising baseball star from Taitung. Wang Yu suffered serious lung injuries in the accident.

An investigation was underway to find out the cause of the crash, Taiwan Railways Administration said.

"The train was in pretty good condition," its Deputy Chief Lu Chieh-Shen told a news conference.

An American woman was slightly injured, according to Yilan firefighters.

The authority was checking whether more foreigners were on board.