Xiong Jing Nan Is Chasing A Stoppage Win In Shanghai 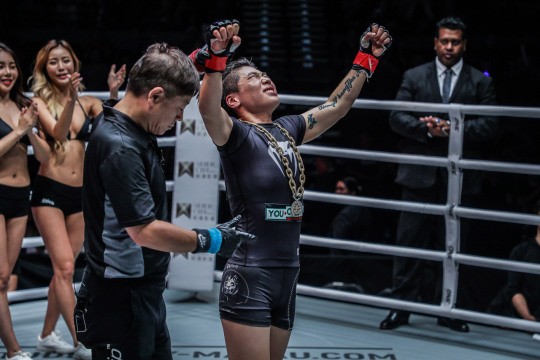 ONE Women’s Strawweight Champion Xiong Jing Nan has reached the top of the mountain in mixed martial arts by capturing World Championship gold.

Now, her aim is to defend her belt and showcase “the power of Chinese martial arts.”

“Sometimes, it is not that difficult to reach the top, but remaining on top is the most difficult thing to do,” the 30-year-old says.

“The world is hearing my voice from China, but I cannot do this without my people’s support.”

“The Panda’s” next appearance will be a special one for her, as she will be defending her World Title on home soil in Shanghai, China.

Xiong will take on Brazilian newcomer Samara Santos at ONE: BEYOND THE HORIZON at the Baoshan Arena on Saturday, 8 September.

In her last bout, Xiong went the distance with Laura “La Gladiadora” Balin to capture a dominant unanimous decision win.

It was the first time we have seen the Chinese athlete pushed all the way to the scorecards in ONE Championship, but it showed “The Panda” has the ability to dominate bouts over five rounds.

“She is very tough. Her ground game is very good, and her power was stronger than I expected,” Xiong recalls.

“To be honest, I was not very happy about [the decision victory] because, in the third round, I thought I could have finished her.

“The match did not go the way I expected. I wanted to finish her so badly, but I was not patient enough.”

With the disappointment of not claiming a finish still fresh in her mind, Xiong is doubly determined to earn a stoppage victory against Santos in Shanghai.

However, she will have to be on her guard against a competitor who has eight finishes to her name, including six knockouts.

“I am pretty sure we both will give our best for this one,” she says, cryptically.

A victory would cement Xiong’s position as the premier female strawweight competitor in ONE Championship and give her a memorable win on home soil.

And it could propel “The Panda” into a champion-versus-champion super bout with ONE Atomweight World Champion “Unstoppable” Angela Lee.

“She is an opponent I really respect,” Xiong adds.