The State Administration of Market Regulation (SAMR) said in a notice on its website that maintaining quality and safety of major industrial products would "provide a solid guarantee of social stability, promote high-quality development and meet public demand for a good life".

The campaign will last until October and focus on "high-risk industrial products", as well as systemic, regional or industry-wide safety risks. It said it would increase scrutiny of manufacturers and operators of high-risk products and look at the use of explosion-proof electrics and structures.

Firms that prove incapable of making the required rectifications will have their operation licences revoked, the notice said. 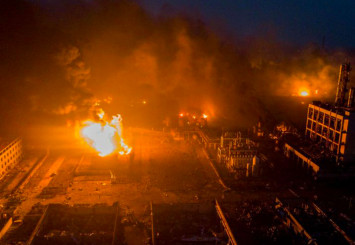 The government has already launched a month-long inspection campaign into hazardous chemical production after a blast at a pesticide plant killed 78 people.

The local government of Yancheng will shut down the chemical industry park where the blast occurred, the state news agency Xinhua said. Dozens of other industrial parks and hundreds of other small chemical manufacturers are also expected to be closed, state-owned tabloid Global Times reported on Tuesday (April 9).