BEIJING - The Chinese government signaled on Wednesday that it would not follow Taiwan's example on same-sex marriage after the first legal unions in Asia were hailed by activists as a social revolution for the region.

Taiwan's parliament passed a bill this month that endorsed same-sex marriage. More than 360 same-sex couples married on Friday after years of heated debate over marriage equality that has divided the self-ruled and democratic island.

China, which claims Taiwan as its own sacred territory, has a thriving gay scene in major cities, but there has been little sign that the ruling Communist Party will legalise same sex marriage, despite activists pushing for it.

Speaking at a regular news briefing, An Fengshan, spokesman for China's policy-making Taiwan Affairs Office, said they had "noted reports on the island" about same-sex marriage. 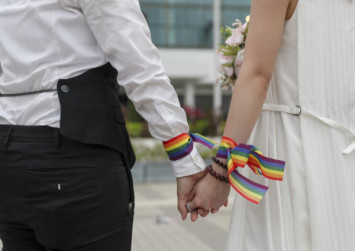 "The mainland has a marriage system of one man, one woman," he added, without further elaboration.

Individual legislators have occasionally in recent years proposed legislation during China's annual meeting of parliament in March to legalise same-sex marriage, without success.

There are no laws against same-sex relations in China and despite growing awareness of LGBT issues, the community has been the target of Chinese censors in recent months.