Chinese man, 36, dies during job interview; said he had overworked in previous job

One moment, he was answering questions in a job interview. The next, he was slumped onto a desk.

The 36-year-old man was rushed to a nearby hospital in Hangzhou, China, on Nov 26 — but it was too late to save him.

Despite the doctors' best efforts, he died from sudden cardiac arrest.

When he lost consciousness, his interviewers stepped forward to check on him and found that he lost control of his bladder.

They called for an ambulance and accompanied him to the hospital.

"We heard that he often worked overtime in his previous job, which was why he was out looking for a new one," one of them told Chinese publication The Paper.

The man was also reported to have a history of high blood pressure.

Sudden cardiac arrest, or loss of heart function, is linked to underlying heart conditions and its onset can be abrupt.

Those suffering from coronary heart disease, high blood pressure, are most at risk of the acute condition, said Dr Hong from the hospital's cardiology department.

But that doesn't mean that people who generally feel well won't be affected.

There have been cases where patients collapse without showing any symptoms, Dr Hong added.

Sudden cardiac death in people younger than 35 years old often occurs during physical activity such as playing a sport, and affects males more than females, according to Mayo Clinic.

Just two weeks prior, the hospital's emergency department managed to save a man who suffered a heart attack.

Once he was feeling better, the patient wanted to be discharged from the hospital, saying that he had lots of work to complete. 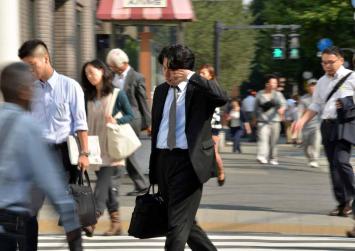 "We advised him to take some time off to recover from the episode," Dr Hong said.

"Patients who suffered heart attacks should not strain themselves further. They should take better care of themselves so as to prevent a relapse."

Death from overwork, linked to hundreds of strokes, heart attacks in Japan, recently came under the spotlight in recent years, prompting the government to introduce measures to limit workers from clocking in excessive hours at work.

ALSO READ: Are we working too much? Singaporeans at risk of developing health problems due to long hours

#Overwork #Heart/Cardiac diseases #death #In Case You Missed It