A woman gets a swab tests at a temporary testing station as outbreaks of Covid-19continue in Beijing on Nov 14.

In the northern city of Shijiazhuang, some families expressed concern about exposing their children to the virus at school, giving excuses such as toothaches or earaches for their children's absence, according to social media posts following a state media report that testing in the city would end.

Other cities, including Yanji in the northeast and Hefei in the east, also said they will stop routine community Covid testing, according to official notices, halting a practice that has become a major fiscal burden for communities across China.

On Friday, the National Health Commission updated its Covid rules in the most significant easing of curbs yet, describing the changes as an "optimisation" of its measures to soften the impact on people's lives, even as China sticks to its zero-Covid policy nearly three years into the pandemic.

The move, which cut quarantine times for close contacts of cases and inbound travellers by two days, to eight days total, was applauded by investors, even though many experts don't expect China to begin significant easing until March or April at the earliest.

The changes come even as several major cities including Beijing logged record infections on Monday, posing a challenge for authorities scrambling to quell outbreaks quickly while trying to minimise the impact on people's lives and the economy.

Some areas of Beijing are requiring daily tests.

The concern and confusion in Shijiazhuang was a top-five trending topic on the Twitter-like Weibo.

The city's Communist Party chief, Zhang Chaochao, said its "optimisation" of prevention measures should not be seen as authorities "lying flat" – an expression for inaction – nor is Shijiazhuang moving towards "full liberation" from COVID curbs.

The city, about 295 km southwest of Beijing, reported 544 infections for Sunday, only three of which it categorised as symptomatic.

"I'm a little scared. In the future, public places will not look at nucleic acid tests, and nucleic acid test points will also be closed, everyone needs to pay for the tests," one Weibo user wrote, referring to Shijiazhuang.

Gavekal Research said in a Monday note that it was "curious timing" for China to relax its Covid policies: "The combination of an intensifying outbreak and loosening central requirements has led to debate over whether China is now gradually moving to a de facto policy of tolerating Covid," it said.

Nationwide, 16,072 new locally transmitted cases were reported by the National Health Commission, up from 14,761 on Sunday and the most in China since April 25, when Shanghai was battling an outbreak that locked down the city for two months.

Beijing, Chongqing, Guangzhou and Zhengzhou all recorded their worst days so far, though in the capital city the tally was a few hundred cases, while the other cities were counting in thousands. 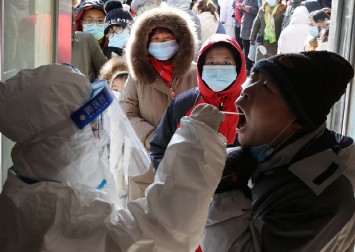 Case numbers are small compared with infection levels in other countries, but China's insistence on clearing outbreaks as soon as they emerge under its zero-Covid policy has been widely disruptive to daily life and the economy.

Under the new rules unveiled on Friday, individuals, neighbourhoods and public spaces can still be subject to lockdowns, but the health commission relaxed some measures.

In addition to shortening quarantines, secondary close contacts are no longer identified and put into isolation – removing what had been a major inconvenience for people caught up in contact-tracing efforts when a case is found.

Despite the loosening of curbs, many experts described the measures as incremental, with some predicting that China is unlikely to begin reopening until after the March session of parliament, at the earliest.

Analysts at Goldman Sachs said on Monday that rising cases in cities including Guangzhou and Chongqing and the continuation of the zero-Covid policy pose downside near-term economic risks.