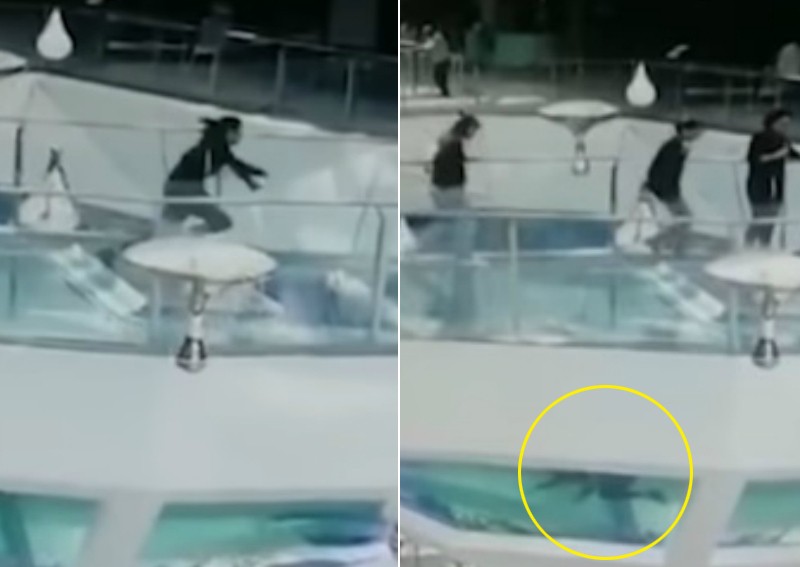 Late for a morning meeting, a woman made a mad dash across a bridge in a shopping mall on Oct 12 in Zhejiang, China.

Halfway through the run, she tripped over a missing glass panel and fell straight into a tank full of young lemon sharks.

The panicked woman splashed a little in the water but did not end up as fish food, fortunately.

According to Discovery, lemon sharks can grow up to 3.5m long and are not known to be aggressive towards humans. However, they will attack if they feel threatened.

In a video clip that recently went viral on Chinese social media, a crowd could be seen rushing to the woman's aid with two security guards jumping into the tank to pull her to safety.

Despite the fall, the woman was unhurt, a shopping mall spokesperson told Beijing Time.

He added that maintenance workers had been feeding the sharks before the mall opened for the day. They had left the tank open without putting up a warning sign.

A safety barrier is usually placed there to prevent shoppers from crossing the glass bridge, he said.

After watching the clip, shocked netizens said that a shark tank inside a shopping mall is a safety hazard while others said that the woman could've been in deep trouble if not for the timely rescue.

Their worries are not unfounded however as a six-year-old girl's right hand was mangled after she was bitten by a shark at a Guizhou shopping mall aquarium in July.