[UPDATE: April 28] Ateeqah Mazlan apologises for actions, says someone threatened to throw acid on her

Aside from Sing Together Singapore and the arrest of Twitter satirist @sharonliew86, the local social media landscape was abuzz over the weekend over a particular individual: Ateeqah Mazlan.

The Suria actress turned aspiring social media influencer found herself in the middle of the storm that’s been brewing for the past few days, or specifically, since the authorities made concrete a ruling that prevents humble home businesses from operating over the heightened circuit breaker measures.

Berita Harian first reported on Saturday (April 25) that HDB clarified its position that food vendors operating from home are not allowed to operate if it involved delivery services. The Board stated that all home-based businesses, regardless of product, will have to cease operations if they require the owner to leave the residential premises or have third-party services deliver the goods.

“During the circuit breaker period, home-based businesses in public and private housing can operate only if all the criteria in the Ministry of Health’s guidelines and the latest provision under the COVID-19 (Temporary Measures) Act 2020 are met,” noted a joint statement by the Trade and Industry Ministry, Environment and Water Resources Ministry, Housing Development Board and Urban Redevelopment Authority.

#homebasedappeal Share this video if Home Based businesses are important to you. Tag important people. pic.twitter.com/4ie8dvYq0W

Businesses that choose to continue to operate during the period without meeting the requirements will face a fine of $1,000 for the first offence, while repeat offenders can be slapped with higher fines or be charged in court.

This, of course, directly affects the businesses of many bakers and chefs who rely on online orders and delivering goods from their homes to their customers.

The thing about home-based food and beverage businesses is that it has always been permitted — small-scale operations are allowed without requiring the approval of HDB so long as owners comply with certain guidelines. With the implementation of the COVID-19 (Temporary Measures) Act 2020, it appears that only online content creators (artists, photographers, writers, etc) can continue operating since their work can be transmitted digitally without anyone leaving their houses or have someone collect or deliver goods.

But temporary safety measures clashing with the month of Ramadan has proven to be an ordeal for the many Malay-Muslim entrepreneurs who’ve had their operations severely affected by the circuit breaker. The Ramadan bazaars that have hosted thousands of vendors every year were officially cancelled, and they were left with a hoard of goods in storage with nowhere to go. 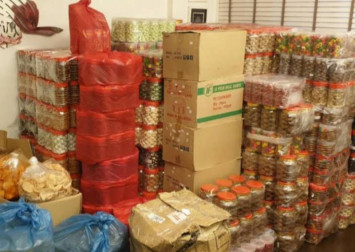 But there was a way for them to recuperate their investments: selling their goods online. Specialised e-commerce platforms like GeylangBazaar.Online, Gobaza.sg and B. Halal popped up to allow folks to purchase snacks, food, garbs and other Hari Raya goodies from merchants who list their products online.

Vendors could also go independent by setting up their own online stores on Instagram and Facebook to receive orders and arrange deliveries to customers on their own using courier services like Lalamove. It’s how home bakers and home cooks have been operating for years, long before the age of Covid-19.

Malay-Muslim customers would benefit as well. With no way to shop for Hari Raya outfits or purchase traditional snacks like kueh sugee and rempeyek at bazaars, ordering online would be the next best method to prepare for the celebrations. Plus, it would help out members of their own community during an already difficult and unstable time.

But that would all come to a tragic halt, and according to the internet, Ateeqah Mazlan was to blame.

The 30-year-old former actress has since become public enemy number one, with her name uttered enough times on Twitter to make it chart as a trending topic in Singapore.

The root of the online furore stems from a video that Ateeqah posted on her Facebook page, in which she describes her in-depth probe into the legality of home-based businesses. Curious to find out if such businesses are even allowed to operate during the circuit breaker period, she went ahead and made some enquiries with various authorities, including the Ministry of Trade and Industry and Housing Development Board, about the issue.

She managed to ascertain that home-based businesses are not allowed to continue operating and encouraged people to call the authorities themselves if they need further confirmation. The video has since been taken down (along with her Facebook and Instagram pages) but has been reproduced on social media last Thursday (April 23).

In the days that followed after Ateeqah’s video, the ruling against home-based businesses were confirmed in the news, sealing their fate. Attempting to fulfil orders of homemade cakes or home-cooked rendang will be considered criminal during this period. Refunds will have to be made to customers who've already paid upfront for their purchases.

This has caused a whole lot of folks online to express their extreme displeasure at the former actress. With many within the Malay-Muslim community directly and abruptly impacted (again), they laid the blame on Ateeqah, now accused of having snitched to the authorities. The term “Melayu makan Melayu”, the Malay version of crab mentality, was thrown around.

I know you're well to do because ive known you for decades. We're unlike you. This is a pandemic. Alot of people turn to small scale businesses to get by this tough time.

Its okay to clarify, but your approach is so wrong that it affects thousands of people.

You better run lahh, woman. Because a lot of home based business owners are super mad at you because you closed their form of livelihood. Especially, during this tough time. You are officially cancelled, Ateeqah Mazlan. There is no way you can bounce back from there.

ateeqah mazlan really be the epitome of melayu makan melayu, and that’s it. for her to stop home-based business out of petty and ‘concern’ during the CB is just as stupid as queuing up for bubble tea the day before operation’s being ceased.

@eeqanoemi You caused alot of ppl who are struggling to survive this Pandemic, lose their only source of income. All because you had to stick your nose where it DOES NOT BELONG.

How blackhearted can someone be to do this in the month of Ramadhan?! #ateeqahmazlan pic.twitter.com/uQM8wvWIzR

Ateeqah Mazlan. You really should had mind your own business. Now alot of people incomes are affected because of you. You are just a flop suria actress(?) who craves for attention. You're not cancelled. You didnt even start to begin with.

Others pointed out that she was simply highlighting existing rules.

The law is the law. All she did was highlight it. Even if she DIDNT. The law is still the law. Making it seem like SHE WAS THE REASON THE LAW WAS ENFORCED is giving her too much recognition. W https://t.co/IGvQrcdzyv

Social commentator @ikansumbat delivered an enlightening look into the saga and why people are furious with the actress. “In a climate of economic collapse and state surveillance, Ateeqah attempted to subject Malay home businesses to greater government monitoring and control,” wrote @ikansumbat. “Importantly, Ateeqah attacked a cherished, life-giving social and economic space.”

Ateeqah, who also runs a failing clothing line, urged them to store their foods till June & apply for financial aid. pic.twitter.com/3GA7kYun54

Already, a petition has been set up to urge HDB to allow small home-based businesses to continue during the circuit breaker. As of writing, it has over 64,000 signatures.

It’s also important to note that home-based businesses that aren’t in the F&B realm are similarly affected as well.

As for Ateeqah, she defended herself on Twitter and demanded evidence that pointed out that she ratted out to HDB.

FITNAH. You guys can point out the time stamp of my “viral video” where I “pauto” to HDB? ? like clear cut I pauto. @Pengkritique u boleh point out since u dah buat article tu?

Senior Parliamentary Secretary for Social and Family Development Faishal Ibrahim has since acknowledged the concerns of the community in a Facebook post today (April 27), encouraging home-based business owners to apply for a Temporary Relief Fund, which would grant them a one-time cash payment of $500.

“I understand that some have taken orders for Ramadan and Hari Raya and are impacted by these measures. This is indeed a very difficult time for everyone, especially during this festive season,” he wrote in a separate post on Saturday, encouraging vendors to seek help from the government.

Farid Khan — former presidential candidate and president of the Singapore Malay Chamber of Commerce and Industry — has stated that it would be urgently looking into the matter and exploring a way to “find an amicable solution without compromising social distancing procedures”.

Minister for National Development Lawrence Wong was more optimistic. "Current rules do not allow for home-based F&B, but if and when community numbers do continue to come down, as we said, we're going to review the numbers," he mentioned at a multi-ministry task force press conference earlier today.

"And if the numbers are brought down, we may very well relax some of the restrictions, and at that time, we will let Singaporeans know when this or any other activities that we think can start will be able to resume."

Ateeqah will be stepping forward on social media to address the issue through a Facebook Live session tonight and will likely speak to the home-based bakers who've been dying to speak to her.