Can you find meals for a dollar or less in this concrete jungle?

The YouTuber regularly travels the globe, taking up little challenges along the way. His latest adventure brought him to our sunny island where he got to review what he considered the world's best vending machines and the world's best airport.

But of course, he's not Briskey if he doesn't attempt one of his regular challenges — finding food for under a dollar.

"In every city in the world, the best place to find cheap food is certainly a market," he proclaims.

While he's not wrong, the only food he was able to find that fit the bill was an ang ku kueh.

He later went on to Little India where he scored a serving of mutton curry which he described as, "the bomb".

For the next couple of hours, Briskey scoured the country, from Punggol Plaza to Chinatown Complex, from Upper Changi Road to Sunshine Place, just looking for food. He was met with little success until locals directed him to Giant Hypermart.

There, he indulged in a serving of dosa with dhal, a packet of chicken ring snacks and… a huat kueh — which many commenters pointed out was commonly used for prayers rather than eating. 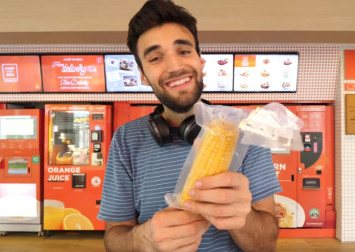 That's not to say you can't eat huat kueh. You can eat huat kueh, but depending on the type of cake it is, it might not taste all that great.

According to a Malaysian Redditor by the name Leo Lee, huat kuehs that are meant for religious purposes instead of regular consumption tend to be made with its appearance as the focus.

As huat kueh are known for their flower-like appearance, a large quantity of raising agents are normally added to make it huat, making it potentially bitter in taste.

"Very subtle, a little bit sweet, could possibly be red bean," he mused.

His reaction when he found out about huat kueh's purpose though, takes the cake.