Alright, so Black Widow didn't make as big of a splash as she should have done in her standalone, but that's hardly the end of the world. However, if your appetite for resolving Armageddon-class events has yet to be sated (as we expect it to be), perhaps stopping a couple of inter-dimensional collisions might do the trick.

Building on the success of the hugely popular Marvel Future Fight, MFR seeks to take that superhero experience to even greater heights, complete with an all-new original storyline penned by Marvel writer Marc Sumerak.

Now, you must have questions, and so did we when we sat down with two members of the development crew last week. Taking the reins of our preview session were Netmarble's Production Director Joe Lee and Marvel's Director of Production Development, Danny Koo, but before we get into the bite-sized session proper, let's have an overview of what we can expect from MFR.

All heroes to the briefing room

First and foremost, let's handle the administrative stuff. In their recent press release, the developers have announced that the pre-registration period for the game has just gone live, so feel free to hop over to the official site to sign up for it at your own convenience.

The full free-to-play title is only expected to hit the App Store and Google Play Store three months from now on Sept 30, and although the game will naturally feature in-app transactions, the developers are adamant that players will still be able to enjoy themselves thoroughly without them.

So, what's the game about? In short, colliding dimensions. Owing to a mysterious inter-dimensional event known as the Convergence, which aims to bring about a new "Primary Earth" within the multiverse, the world's finest discover that our humble planet is on a one-way collision course with numerous other iterations of itself. 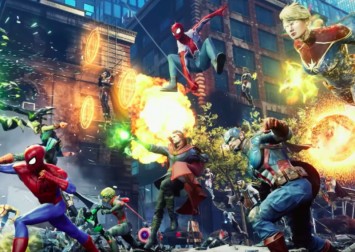 Unfortunately, despite the heroes' best efforts, they are only able to save a handful of those dimensions, and only because the Vision sacrificed himself to power a machine known as the Convergence Engine.

Following this world-ending event, the heroes of the surviving dimensions have banded together to create the new Omega Flight superhero team, with the main aim of preventing the equally numerous number of super villains from wreaking inter-dimensional havoc.

Naturally, this is where YOU come in - players will be tasked to form a squad of their favourite heroes and stop baddies across this chaotic multiverse.

From the high-rise skyscrapers of New Stark City, to the devious depths of the Hydra Empire, you'll be thrown into environments that are simultaneously new and familiar, and you certainly won't be left wanting for variety.

Let's poke around the works

With the textbook script out of the way, let's see what else the developer duo had to share with us. The first question we posed was arguably more of a "meta" concern, and in more ways than one too.

Simply put, we asked about game and hero balancing - many F2P games often draw the ire of their players because they tend to put up pay walls at certain points, which causes a large and often inescapable divide between F2P and pay-to-win (P2W) demographics.

As such, what does the team have to say about potential "meta" team compositions springing up, and what will be done to address them considering MFR does feature whopping 10v10 PvP modes?

To that end, Lee answered our question by establishing the baseline - the team will be keeping a particular close eye on hero representations, and adjustments will be made accordingly. However, he did note that there is a fine line to toe here, as part of the fun in such superhero games is that feeling of being ever-so-slightly overpowered.

In short, it's a matter of experience versus efficacy, which means the team will have to ensure that they don't take points from both ends of the spectrum by mistake during the balancing process. And if all else fails, he jokes that that players will at least know who to look for to complain about such matters!

Moving on, we asked about aesthetics next. Given that the premise of the game features a multiversal concept, it is to be expected that different hero skins would be one of the game's main draws. The developers have touted that there are over 400 million possible costume combinations for each hero, and considering we've got eight different heroes to choose from, that's a whole lot of options.

Getting back on point, we asked about the experience developing not just the hero cosmetics, but the stunning visuals of the different realms. Apart from the aforementioned New Stark City and Hydra Empire, players will also get to experience whole dimensions themed after the likes of Asgard and Sakaar, among numerous others.

In response to this, Koo mainly expressed that the team was immensely excited to work on them, given that they weren't just tasked to create these prominent landscapes, but to expand and design an entire world all around them. This effectively gave them more options to work with, and the "shared aesthetic" of each realm also opened the doors to creating themed cosmetic sets for the different heroes.

Needless to say, he mentioned that such features tie in well with the multiplayer aspects of the game, such as the Raid, Blitz, Special Operations and aforementioned 10v10 PvP modes. After all, winning with a fully-matching set of gear does net you some metaphorical style points, doesn't it?

All in all, both developers did emphasise one thing across the board: That such a large-scale project wouldn't have been possible without the other company (Netmarble or Marvel's) contributions.

In a sense, you could even say that they're like a "superhero squad" unto themselves, which is honestly a pretty amusing way of looking at it. Nevertheless, we'll end off with a reminder to drop by the official site and pre-register for the game.