Esports, darts, and Indomie: Bountie Arena opens in the heart of one-north

A new esports arena has just opened up in the heart of one-north, and it is massive. Taking up 6,600 square footage in the basement of the Connexis Tower, Bountie Arena touts itself as Singapore's premier esports and gaming lifestyle venue — and it’s hard to argue against that claim.

“We took three units from JTC Corporation and combined them into one big unit,” explained Lex Na, CEO of Bountie Holdings. How else would you fit a total of 112 high-end gaming desktops into a single space? But the PR talk involves building a holistic experience for gamers — both casual and professional — with the aim to be a one-stop facility for training, entertainment, and… instant noodles. More on that later.

On the gaming side of things, Bountie Arena is all specced out. The premises wow you from the get-go with a 13-metre-wide LED display panel (running at 144 hertz!) on the main stage, flanked by gaming stations that hold five PC rigs on each side. An enclosed booth is situated offstage, where esports casters can yell out play-by-play commentary (which is not as easy as you might think, by the way).

But the section that gets your geeky side going is the spacious main gaming area, consisting of 60 beastly desktops and accessories (courtesy of ASUS Republic of Gamers) — all connected by high-speed internet (courtesy of MyRepublic). Lumbar support is available with Secretlab-But-Not-Really gaming chairs, all adorned in Bountie Arena accoutrement.

An array of private rooms provide some relief from the potential din of intense mouseclicks and clacky keyboards. Esports teams can train behind closed doors across four VIP gaming rooms, which are optimised for athletes and their coaches to run through strategies. They’ll even install more appliances like digital whiteboards to make game coaching a breeze, explained Bountie Arena’s Chief Gaming Officer, Check Ho.

“We really want to help Singapore develop more esports athletes,” declared Ho. He puts it as a sort of co-working space for esports teams, where athletes can just drop by to train and have other needs like food, drinks, and other amenities taken care of.

A bigger 20-seater private room is meant to be a classroom of sorts, and Bountie Arena is opening it up for schools, corporations and other parties to use it for private courses.

“In this space, we don’t want to cater to just esports — we want to offer gamification to corporate clients,” said Ho.

“Just visualise — a game of Left for Dead in contrast to a basketball match. Both can teach you teamwork, but one of them involves sweating a lot. We’re hoping to provide a comfortable environment with minimal risk involved and train skills together.”

If you’re not all about that 24/7 PC Master Race, there are several other options to check out at the joint. A console gaming room hosts a Playstation 4, two sets of Nintendo Switches, and a Nintendo Labo Set for wholesome VR fun. Out in the lounge, there’re two Pandora box arcade machines to play classic game titles of yore, and an Atari Pong coffee table for some really old-school matches. Soon there’ll be a ball pit too, and no, that’s not a joke.

The part that deviates from the rest of the gaming stuff is the inclusion of a darts section, complete with five of those blinky digital dart machines. I’m told that they’re made by PHOENIXDARTS, a Korean brand that’s a huge deal in the darts world, and Bountie Arena is hosting their local flagship store where dart players (darters? dartists?) can buy their equipment.

For nosh, there’s an in-house cafe that appears to be fully optimised for stereotypical gaming diets, and that means sugary soft drinks and lots of instant noodles. A Coca-Cola Freestyle machine is set up for guests to have access to 165 different combinations of sickly sweet concoctions, and just in case patrons need more risk to diabetes, bubble tea options. A wall of instant noodles packets patterned in Tetris shapes serves as the food menu, with Indomie (food of the gods) serving as the main hero. Bountie Arena claims that they’ll be serving deliciously gourmet instant noodles, but since we never got to try a sample, that claim remains unverified.

It’s getting harder for the powers that be to ignore the potency of esports — especially these days when a Fortnite-playing teenager can win more money than typical sports athletes. Hell, even Prime Minister Lee Hsien Loong recently had to learn how to play Dota. 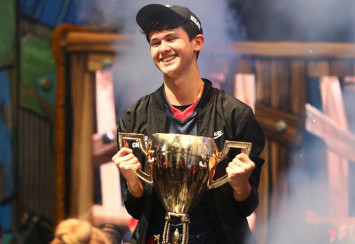 So it’s not surprising that Senior Parliamentary Secretary for the Ministry of Culture, Community and Youth and Ministry of Transport Baey Yam Keng was right there to grace the launch of Bountie Arena.

“The growth of esports and the gaming industry have provided youths new opportunities to pursue different pathways of success,” he mentioned.

“I am encouraged that there are now spaces like Bountie Arena which provide youths with a conducive environment and the right tools to pursue their passions in esports, and fulfil their aspirations.”

Entry rates will be at a promotional price of $1 per hour for each user for the first two months of opening and will be revised after that period.