It’s a dog-eat-dog world out there, and what happens in bedrooms should probably stay in bedrooms.

In an explicit tweet made by an account by the handle of @KingMrXX on Jan 20, two publicly viewable images depicted two uniformed men in the throes of an... unorthodox sexual activity.

In one picture, a man in an unbuttoned SAF uniform is wearing a dog gimp mask with his neck leashed to a chain. His nipples and his exposed genitals were clamped and hooked up to what seems to be electrical cables.

In the next image, the masked man is seen kneeling in all fours with his pants down and a tail plug extruding from his rump. Another man in an SAF uniform — his genitals exposed as well — stands over him with a cane in one hand and the leash in the other. 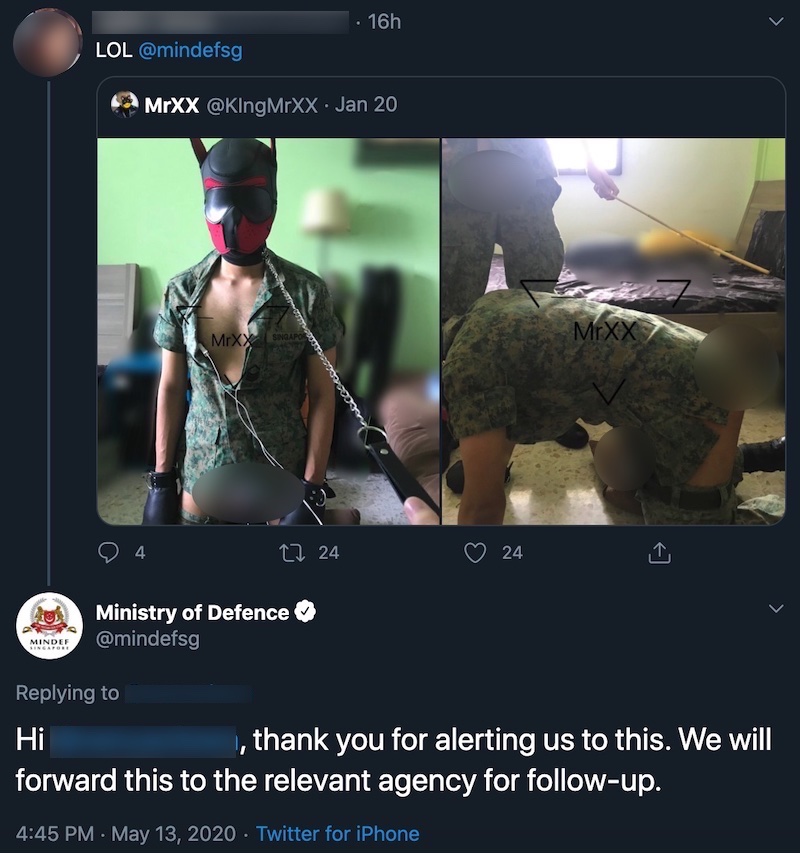 The @KingMrXX account was quickly taken down after Mindef confirmed to two users on Twitter that they're looking into the affair. SAF-themed meme page Memedef was quick to jump on it though.

AsiaOne reached out to Mindef and they are investigating the incident.

If SAF uniforms can’t be worn as casual wear, it definitely can’t be used for trysts. Under the Decorations and Uniforms Act, anyone caught for the unauthorised use of any part of the naval, military, air or police forces uniform, including badges and medals, can be convicted in the Magistrate's Court. If found guilty, offenders can be fined up to $400 or jailed up to three months.