SINGAPORE - Facebook has blocked access to a page on its platform that has been publishing falsehoods on various issues in Singapore, including the coronavirus outbreak, but not without registering its protest.

The social media giant on Tuesday (Feb 18) disabled access to the States Times Review (STR) Facebook page, making it unavailable to users in Singapore after it was required to do so under the Protection from Online Falsehoods and Manipulation Act (Pofma).

Commenting on the move, Minister for Communications and Information S. Iswaran said it was especially important to stop the spread of falsehoods as Singapore battles the coronavirus disease, known as Covid-19.

"The reason why we need to act swiftly is because if we don't, then these falsehoods can cause anxiety, fear and even panic," he told reporters yesterday at an event held by the Hindu Endowments Board to discuss precautionary measures against the coronavirus.

The STR Facebook page, owned by Singaporean Alex Tan Zhi Xiang, has received three correction directions under the fake news law since last November. Two had to do with the virus outbreak.

After Mr Tan ignored all three directions, the STR page was designated a declared online site (DOS) on Saturday and barred from receiving any financial benefit, among other things.

Despite this, he did not comply with the rules under Pofma, and the authorities then issued an order for Facebook to disable access to the page for Singapore users.

On Tuesday, a Facebook spokesman told The Straits Times the company had conducted a careful review and determined that it was legally compelled to restrict access to the page under Singapore's laws.

But she criticised the order for being disproportionate, and said it contradicted the Government's claim that Pofma would not be used as a censorship tool.

She added: "We've repeatedly highlighted this law's potential for overreach and we're deeply concerned about the precedent this sets for the stifling of freedom of expression in Singapore." 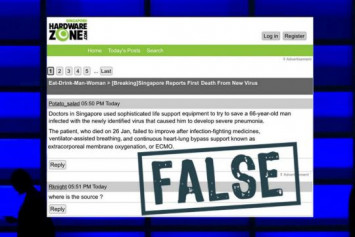 Under Pofma, online sites can be designated as a DOL after they receive three corrections directions within six months.

In the case of the STR page, the Ministry of Communications and Information had noted that it "has repeatedly conveyed numerous falsehoods".

The erroneous claims that the page was issued corrections directions for included statements that Singapore has not been able to trace the source infections in any of the coronavirus cases, and that the country had run out of masks.

Emphasising the importance of ensuring that Singaporeans get the right information during a public health threat, Mr Iswaran said STR's actions and those of others who have perpetuated falsehoods during this period could cause anxiety, fear and even panic.

"We want to avoid that because that is not only (unhelpful) to our overall effort, it is actually going to be harmful," he said, describing the battle against the coronavirus as both a healthcare and psychological challenge.

"On the psychological side, it is essential that... we put out timely information, accurate information, so that our citizens are well informed and understand what is happening." 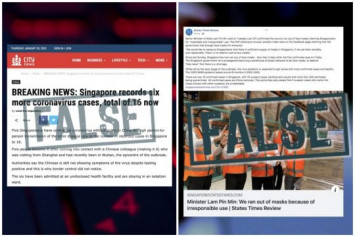 Noting that some people have exploited the situation to purvey falsehoods, he said it was critical to shut down such lies swiftly.

In most of the five cases to do with the coronavirus outbreak so far, those who have received the correction directions have complied. Only Mr Tan had ignored them, he added.

The Government had to issue a further direction under Section 34 of Pofma to disable access to the page for Singapore users after Mr Tan failed to put up a warning as required when it was declared a DOL, Mr Iswaran said.