Effectively one of the most “leaked” cameras to come out of the woods in the last couple years, Canon has finally unveiled their new mirrorless sports and wildlife camera – the EOS R3.

While Canon has touted the EOS 1DX Mark III as their Flagship camera since is launch, the R3 challenges and surpasses the 1DXIII in every way, minus the build quality of course, making it the unofficial “flagship” in their lineup.

From a design perspective, the R3 takes the best of what Canon has done with the R5 and R6, and merged it with the 1DX series of camera, giving users a smaller and lighter professional camera with a flip out rotating display at 3.2 inches and 4.15 million dots, with build in vertical grip ready to take on anything thrown at it.

The design of the camera is smaller and won’t be for everyone, but this camera isn’t designed to be, since this is for the professional photographer that needs speed and durability, and is willing to sacrifice some size and weight to achieve that. In this regard the R3 succeeds, but there are a few points that will pose a challenge to potential buyers, especially when comparing to other systems at similar price points.

Inside, we have an all new 24.1 Megapixel BSI (Back Side Illuminated) stacked CMOS full frame sensor, achieving speeds of up to 30fps and a shutter speed at 1/64000. In addition, low light performance has improved, with the camera able to reach ISO values of 102,400 and expanded to over 204,800. 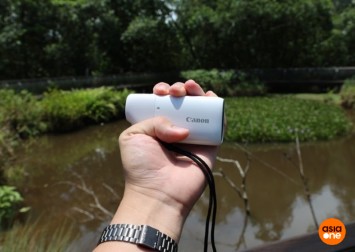 Also, the camera is still able to focus on subject at minus 7EV, which basically means the camera can see in the dark. It’s clear from these specifications that Canon’s sights are squarely on Sony’s professional offerings such as the A9II and Alpha 1.

In addition, you have an upgraded Dual Pixel 2 AF system that improves upon what was already successful in the EOS R5 and R6, adding more customization and even a motorsports mode to capture fast-moving cars, motorcycles or even the helmets and visors of the drivers and riders wearing them. Alas, due to Canon Singapore’s strict guidelines, we have no real-world samples or even test images to show you how great the AF is.

With the updated Autofocus system comes a new “Eye Control AF” feature, where the EVF is calibrated to your eye through a series of steps, to help the camera focus via a circle on what you are looking at, versus what the camera deems important.

We tried this on a couple different test cameras and unfortunately, we didn’t have great success in achieving focus when looking at subjects in the EVF. If we focused on a person, the circle would veer towards the right and so on.

Of course, the firmware we tested wasn’t final. While we may categorize this as a gimmick in its current form, it’s an exciting technology and we’re curious to see what Canon does with it. Outside of the Eye Control AF, the camera’s AF system is so fast at picking up faces and eyes, so we feel no need to use Eye Control.

Image quality has also been improved over the 1DX Mark III. While the 1DX has a 20-megapixel sensor, the R3 touts a new 24.1 MP sensor which Canon says has better overall image quality than the 5D Mark IV and EOS R.  Unfortunately, we did not see any evidence to back up this claim, but from our test with the R6, we found the camera to perform more like a 24 MP sensor.

Video is also a big factor with the R3 and while not matching the R5’s 8K raw video capabilities, the R3 can record up to 6k 60fps in Raw and of course 4k, 4k 120fps and HD video modes. For a complete list please see below:

The video performance should satisfy most creatives outside of the more professional film makers.

When it comes to heat management, Canon is touting up to one hour of 4K recording with the temperature settings set to High, so if this is accurate, this will be the best performing R series camera for video to date. We will test this extensively for our full review.

Battery life is also a big consideration taken by Canon for such a power-hungry machine, thus they are giving the R3 the same LP-E19 Battery as the 1DX Mark III.  This will give the R3 power to produce over 880 shots. As for video, it will vary based on usage, outside temperature and so on.

In addition, the EOS R3 now has a multifunction hot shoe that will allow a series of devices to connect to and relay information to the camera.  This will work with certain speed lights, microphones and other accessories from Canon and while we didn’t have the ability to further test these devices, our initial impressions were that Canon has created something like what Sony has on their newer Alpha series cameras.

Ultimately, the R3 has a lot going for it, making it the most capable out of the R series of cameras to date. While many were hoping for a higher megapixel sensor of 24MP, this does seem to be the sweet spot for many professionals who capture the largest sporting events and wildlife images.

Read Also
Get busy living: These cameras up your game amid Covid-19 restrictions 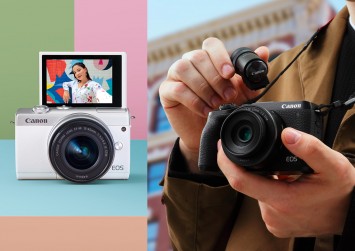 Additionally, the price of the RF lenses needed to maximise the potential of the R3 are more expensive than many offerings from Sony, thereby increasing the investment cost of the R3 substantially. While we find the RF lenses to be some of the best made AF lenses on the market, economics do come into play even at this price point and for many, this may be the tipping point for buyers.

If the camera was priced at around US$5,000, it would make for a highly competitive offering from Canon, and may entice many of their users that went to Sony to return to the fold. A US$1,000 price difference, along with additional heavy investment in RF lenses might give them enough pause to remain where they are.