Hands on with the Mate Xs, Huawei's new $3,788 foldable phone

Yeap, that’s no typo. Huawei’s new and improved sequel to their first foldable mobile device is here in Singapore for more than the price of two entry-level iPhone 11 Pro Max units.

The Mate Xs will be available islandwide come March 21 at the cool, cool price of $3,788 at all Huawei Concept branches, various consumer electronic stores, as well as selected M1 and StarHub outlets. For Singtel subscribers or anyone else who’s understandably staying away from crowds these days, there’s always Lazada and Shopee.

It’s also understandable if you haven’t heard of the Mate Xs’ predecessor — Huawei’s first-ever foldable phone didn’t make it outside of China. But it certainly was lauded by many as the most solid take on a foldable device that straddles between a smartphone and a tablet. And of course, something that fared better than Samsung’s troubled Galaxy Fold.

Right now, it seems that Huawei’s Mate Xs might be the best look at the future of smartphones, or at least, that’s what I took away from a brief hands-on session with the device yesterday (March 12).

The first thing that I noticed was the hefty 300g weight, a bold 'screw you' to lighter contemporaries. This was explained by the fact that the device packs two batteries — one on each half of the screen that totals up to 4,500mAh in capacity.

Then, of course, there’s the display itself. Folded, the main screen is 6.6-inches and is perfectly useable on one hand like most other smartphones. Click a release button on the back and the screen unfurls into its full 8 inches, with the user interface seamlessly expanding and contracting according to the movement.

Here’s where you can see that Huawei’s foldable form factor is a lot more practical than Samsung’s concept. For the Galaxy Fold, users can only properly operate the device when it’s fully open in tablet mode. The Mate Xs, on the other hand, is perfectly useable whether its folded or not. One could still read and write messages, browse the web and do other smartphone-y tasks in its clasped state.  Need more screen estate to watch videos or do some online shopping? Just stretch the whole thing out.

A pragmatic approach for sure, but one that brings up questions about durability. Exactly how scratch-resistant will that wraparound display be over an extended period of time? Huawei boasts that the screen has a protective layer of aerospace-grade material that costs way more than gold by weight, while a refined version of their hinge mechanism apparently minimises the crease in its folded screen.

Be that as it may, the crease is still pretty obvious, especially when I started handling the device in my hands. There’s also the fact that the OLED display is made of pliable plastic, so it doesn’t feel as smooth as the regular glass screens we’re all used to. There’s definitely a bit more friction while swiping on the phone and the likelihood of leaving visible fingerprints goes up a notch.

The wraparound display would also mean goodbye to just leaving the device flat on the table, lest you’d want to risk scratching the plastic. Huawei has a solution (sort of) in the form of a bendy bumper case that’ll raise the screen off surfaces slightly.

An all-screen design relegates the Mate Xs’ Leica quad-camera array into a single row on the back. It’s four lenses — a 40-megapixel main camera, an 8-megapixel telephoto camera, an ultra-wide 20-megapixel camera and a time-of-flight sensor. I didn’t get to properly test the shooters out, but from the brief playtime, the quality of photos are still very Huawei, i.e. impressively sharp and vivid. 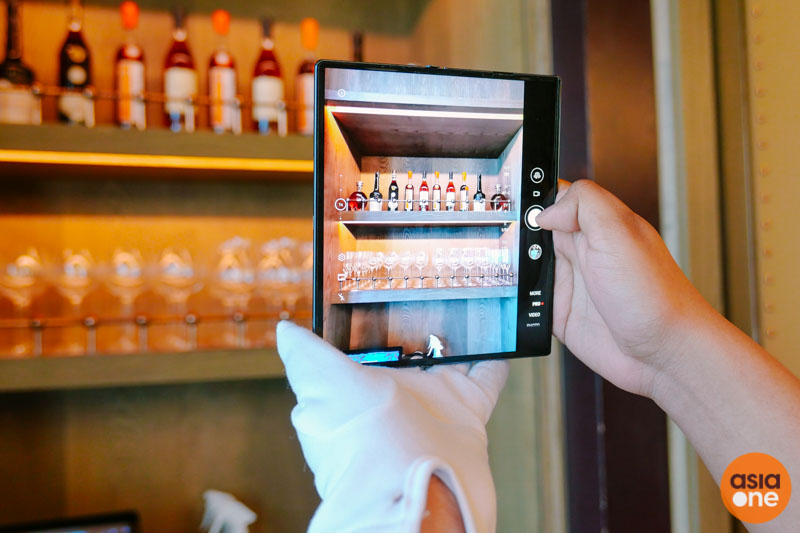 The real kicker here is that selfies will be taken using a full-fledged main camera array, and not with a weaker lens. The folded screen at the back of the phone will act as a secondary display and a viewfinder, which is an absolute hoot to see and use.

Of course, I have to talk about the lack of Google apps. The trade war between the US and China doesn’t show any sign ending, and users of the Mate Xs (or any future Huawei phones) will continue to be hampered by the absence of Google Play Services. And without essential mobile apps like Gmail, Google Calendar or Google Maps, the $3,788 entry fee makes the device a tough sell, even if the company’s own AppGallery is slowly building up steam.

Also, do you actually need a foldable phone? Is there an urgent need for a pocketable tablet? While the likes of Samsung (and other firms that invested heavily in pliable screens) may disagree, the truth is that the majority of consumers today are still very much happy with their non-foldable phones. The Mate Xs is cutting-edge for sure, but right now, I don't think the general population and their wallets are flexible enough to let Huawei’s latest and greatest into their fold.