You could cut the tension in the air with a knife right now. The sticky situation between personal mobility device (PMD) riders and politicians over the recent e-scooter ban has no end in sight.

Unfortunately for a couple waiting for a ride at a bus stop, they had to bear the brunt of an exasperated rant by a passing PMD rider.

A 2-minute-long video had been shared by Roads.sg on Nov 14 — a clip filmed from the point of view of a PMD rider confronting a couple he accused of staring at him disapprovingly.

Posted by All Singapore Stuff on Wednesday, November 13, 2019

Apparently peeved by the way they had been looking at him, the PMD rider approached the couple with the intention to reprimand them. He filmed the confrontation, demanding to know what he did to have earned their supposed scorn.

The couple, however, looked genuinely confused about this. The man denied any notions of trying to pick a fight while his companion started recording the incident on her phone.

It quickly escalated to a heated argument, where the PMD rider could be seen continuing to harass the pedestrian couple. The rider repeatedly asserted that the beef over the e-scooter prohibition on footpaths is between PMD riders and the Land Transport Authority, and that anyone else shouldn't get involved.

The footage induced a reprisal among Singaporean netizens, who strongly expressed their displeasure and disgust at the antics of the hostile PMD rider. 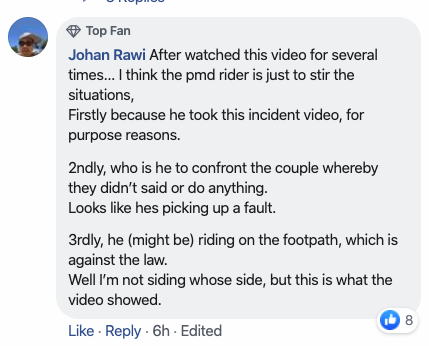 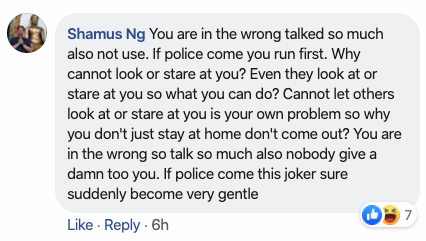 Others hoped that the food delivery companies or even the LTA would make a move to rectify the situation and have him punished.