Singapore’s only hot spring park reopened last Saturday (Jan 4) after a revamp that cost the country $4.3 million (dayum), attracting folks across the island to soak their feet and their eggs in geothermally-heated groundwater.

Who better to review the Sembawang Hot Spring Park than an actual Japanese person who’s more than familiar with onsens? Even better if that person is a popular vlogger who managed to show that Yishun is not as dangerous as local netizens (jokingly) make it out to be.

Ghib Ojisan made a return to the heartlands of Yishun recently to check out the refurbished park — partly to see how it compares to the hot spring facilities he’s used to back home, and partly to try his hand at boiling an egg using the heated spring water. Which is totally a thing there.

But before making the sojourn there, the YouTuber made sure to visit Chong Pang Market & Food Centre nearby to nosh on duck rice from Michelin Big Gourmand-recognised Chuan Kee Boneless Braised Duck.

It’s clear that the vlogs documenting his adventures around Singapore have earned him some fame, judging from the repeated instances of residents recognising him.

Ghib brought up some Japanese connections to the Sembawang Hot Spring Park, namely about how Japanese soldiers had built thermal baths around the spring during World War II, turning it into their regular hangout spot in their downtime from committing massacres during the occupation.

Ugly history aside, the YouTuber actually loves the spot, calling it “a legit onsen” that might not be traditionally Japanese (submerging your whole naked body at Sembawang Hot Spring Park would be, uh, frowned upon), but good enough for a good foot soak. He does point out that it feels odd doing it in the typical heat of Singapore’s weather. 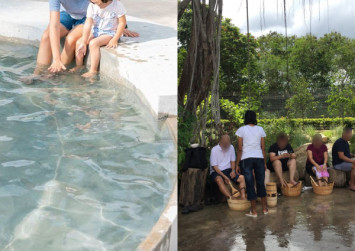 Unfortunately, he made the rookie mistake of not letting his egg sit under running hot spring water. So even after letting his egg soak in the bucket of water for 10 minutes, he cracked open a raw egg in lieu of a hard-boiled one.

Nonetheless, he enjoyed his time at the park.

“There are many differences from the onsen in Japan, but there is one thing that is the same — it’s a community place. People can gather and interact, you can naturally talk to others,” he narrated to viewers.

“This is a hot spring. It brings people together.”