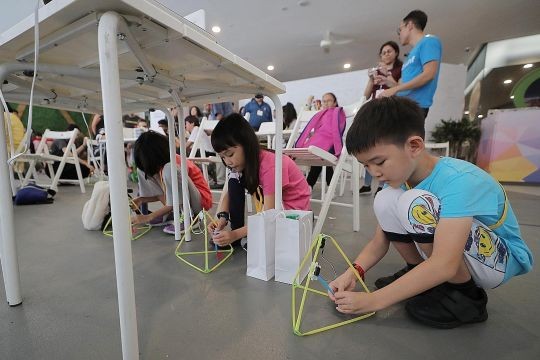 Siblings Ma Junlong, eight, and Ma Xiangyu, 10, building walking robots at a taster class for Code in the Community's new applications programme at Our Tampines Hub yesterday. The programme will introduce more complex ideas and encourage children to apply what they learnt through activities.
The Straits Times

Knowing of his keen interest in science, mathematics and anything to do with numbers, his mother Josephine Ng signed him up for coding classes under the Code in the Community (CITC) programme.

The initiative, started by Google in 2017, offers free coding classes to children from low-income families to teach them basic coding skills and inspire them to discover and explore with technology.

Speaking to The Sunday Times yesterday at a graduation ceremony at Our Tampines Hub for students who completed the programme last year, Aiden said: "It is fun when I put the codes together on my computer and I can see that it creates a program. I like experimenting with the different codes."

One of the programs he created is a five-question quiz in which a cat poses questions to the player.

Through the CITC initiative, other participants have also managed to create useful programs.

Google is expanding the curriculum and scope of the initiative, with 6,700 more children expected to benefit from an increased range of free coding classes over the next three years.

The tech giant and the Infocomm Media Development Authority (IMDA) each contributed $1 million towards the expanded initiative, which has equipped about 2,300 children from low-income families with basic coding skills since its launch in 2017.

The commitment was announced by Deputy Prime Minister and Finance Minister Heng Swee Keat at the graduation ceremony.

"The programme has not only sparked an abiding interest in technology among many of its participants, but also helped them gain confidence in problem solving, taught them not to be afraid of failure, enabled them to discover the joy of learning, and helped them gain concrete skills to work towards goals, and eventually, fulfil their dreams."

CITC currently offers a foundational programme where pupils aged eight to 12 learn Scratch, and students aged 13 to 16 learn the Python coding language, which is widely used in the tech sector.

With the expansion, foundational programme graduates will be able to go on to a new applications programme, which will introduce more complex concepts and encourage children to apply what they have learnt through activities, such as programming a robot.

Both programmes comprise 16 hours of classes spread across eight weeks.

"By providing grant funding to Code in the Community, we want to empower all kids in Singapore to discover and explore technology."

"At its heart, becoming a Smart Nation is about the community working together, so that no one - regardless of their age or background - is left behind by technology," he said.

From this year, all upper-primary pupils will be required to take a 10-hour coding programme, which is not examinable.