A review of Nintendo Switch Sports.

If you happen to be a gamer who counts the original Nintendo Wii console as one of your favourites, chances are that you would have enjoyed the pinnacle of motion-powered party sports games in Wii Sports then.

The original five sports of tennis, baseball, bowling, golf, and boxing were all fun, and even with the sequels, Wii Sports Resort and Wii Sports Club, could not beat the magic of that first experience.

That is not to say that it is a bad experience as each of the sports that players can enjoy alone, or in groups, both offline and online, has its pros and cons.

Just as what players would expect, the collection brings together six different sports that challenge you in various ways, all brought to life using motion control in one way or another. The disappointment is when you are expecting something you have not seen before.

If you are searching for racket sports in Nintendo Switch Sports, both Tennis and Badminton are excellent activities to take part in. The former can hold up to four players both locally and online, and even if you have less than four athletes, a single player can control an entire team in a 2v2 match.

Using the Joy-Con, executing the serves and shots are all about the timing, and if you want to make things even more fun, twisting in either direction can deliver backspin and topspin shots like the pros.

The same applies to Badminton as well, with a 1v1 experience that is all about controlling the court. Time your shots well to pull off a debilitating smash, or engage in long rallies to see who can come out on top.

Lastly, catch your opponent off guard with a perfect drop shot to set up your impending victory. For both sports, things are simple enough to pick up and play, but there are many nuances if you want to dive deeper with the more complex shots.

That also extends to the fan-favourite sport of Bowling as well, as a well-executed hook can give you the spin needed to knock down those pesky pins.

Akin to taking a trip down memory lane, bowling has always been fondly remembered and it is the same case here, allowing for up to 16 players to engage in the sport.

However, if you want to spice things up, there is also Special Bowling, where obstacles and gaps become the norm to test your bowling mettle. Not only does this give players more reasons to play, but the variety involved is also always a joy to behold and to be overcome.

When it comes to Volleyball in Nintendo Switch Sports, the Joy-Con can be used to serve, bump, set, block, and smash your way to victory through upwards and downwards movement. With the AI controlling the movement, the mastery of timing comes into play if you want to be the best.

Moving onto Football, this is the only sport that can utilise the additional Leg Strap accessory that comes with physical editions of the game, or borrow one from the Ring Fit collection.

Whether it be a 1v1 or a 4v4 match, players will be dashing around the field, frantically swinging their Joy-Cons or their legs to kick balls around.

Think of Rocket League, but with colourful characters running about instead. For the spectacular, executing a diving header is also always enjoyable when it comes to rubbing it in your opponents' noses.

The sport also has the Shoot-Out mode, where the objective is to put the ball into ever-shrinking goals in a head to head to find out who's the best.

Last but certainly not least, Chambara rounds off the selection in Nintendo Switch Sports. Just like the familiar swordplay sport, Chambara is perhaps the most complex sport in the game, with three distinct ways of playing.

Sure, you may be wielding foam swords in each mode, trying to drive your opponent into the water, but the approach will differ.

The standard Sword mode is all about taking advantage of your opponents' stumble, blocking their strikes and making your move. The tension that permeates any session is always intense, as one wrong move could easily lead to an easy victory.

Switch over to the Charge Sword, then defence becomes your strongest offence. By guarding successfully, you will build up power for stronger Charge Strikes, making every tussle an important one.

As for sheer mayhem, consider fighting with the Twin Swords. With double the number of swords to attack and guard with, the guessing game becomes even more zealous. And when you build up enough power, unleash the Spinning Strike to grab victory.

Even in its current state, where online play is still not available, the potential for Nintendo Switch Sports is clear to see. Nintendo has made sure that solo players can still enjoy themselves in the various sports, but everything becomes much better when the party gets larger whether locally or through online play.

However, like the original Wii version, the AI is in need of some tweaking, especially if you are looking for more of a battle. On the harder difficulties, it can still be slightly easy to get one over your opponents, but on the other hand, this is a family-friendly game, which makes it more understandable. 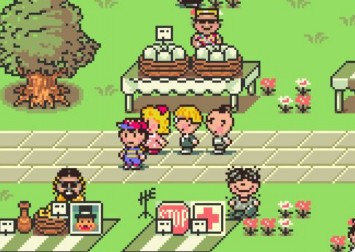 The accuracy of motion controls is also almost always there, but it is not exactly perfect, with some dropped balls and missed shots expected during your time with the game.

The current offline-only nature of Nintendo Switch Sports also removes much of the customisation aspects of the game. As there are no points to be earned, there is no way of accessing what could be a large selection of outfits, sports accessories, gear, and other options.

This will change once the game is out in the wild and online play becomes viable, but it would have been nice to see what awaits players.

The coming of online will bring not just entertainment for friends, but also a competitive contest with the Pro League.

Players would be able to show off not just their coolest looks, but also your ranking amongst the world's best in Nintendo Switch Sports, and whether that would be smooth sailing remains to be seen, considering the platform's less than stellar online infrastructure.

By distilling popular sports into easy-to-understand experiences that also happen to contain a level of depth, this is probably the best use of motion controls in a setting that makes sense.

Even without capturing the long-gone magic of the original Wii Sports, Nintendo Switch Sports does deliver a modern, great-looking experience that will only be boosted when the online component comes on.

With golf coming as a free update later in the year as well, Nintendo Switch Sports will hopefully be supported for a considerable amount of time, so that players can continue to have a ball of a time even when they are indoors.

With a good selection of sports and robust motion controls that just work, Nintendo Switch Sports has everything to become an all-star, that is, if the online play holds up to the modern standards.