Pokemon Legends: Arceus is great for newcomers, even better for fans

To say that the Pokémon video game formula has been refined to a tee would be an understatement, as every new game has paved the way for more innovations in the franchise for both good and bad.

With the recent release of Pokémon Brilliant Diamond and Pokémon Shining Pearl, the chance to relive a beloved adventure with modern trappings is hard to pass up, but with Pokémon Legends: Arceus, both Nintendo and The Pokémon Company have instilled renewed vigour with a clever genre twist and providing us with a lens into the past.

In place of the Sinnoh region comes the Hisui region, in a time where humans and Pokémon existed in spite of each other, and not at all the harmonious relationships we have gotten used to. Dropped into the past from parts unknown, players will begin their journey in Jubilife Village, and start laying the foundations for many of the series staples as they explore, learn, and master the art of Pokémon capturing and battling.

The connections between Pokémon Legends: Arceus with both Diamond and Pearl runs deep as these are essentially the same places with largely the same creatures running about, albeit with changes in appearances.

However, instead of the modern world, the land of Hisui is more medieval in nature, stocked full of characters, items, and Pokémon that will instantly make invested fans really happy, but still relevant for newcomers.

As revealed beforehand, many of the characters found in the game are related to their modern counterparts, and it is a nice nod to the series’ history that makes Pokémon Legends: Arceus an even more enticing proposition for fans. That, and of course, the Pokémon action.

The appearance of the player coincides with a space-time rift that has cracked opened the skies above Hisui, and it is clear that resolving this crisis becomes the main objective of the game. From picking your starter between Cyndaquil, Rowlet or Oshawott, to joining the Galaxy Expedition Team, at the centre of it all is compiling the Pokédex for Professor Laventon, learning about these magnificent beasts, and finding a solution for the rift.

It may appear to be quite the standard setup for a Pokémon game, but with Pokémon Legends: Arceus, the script is flipped with the transition to a limited open-world that is almost reminiscent of Monster Hunter World, with various biomes housing different Pokémon at different times of day, eager to test your mettle.

Gone are the days of tall grass and trainer battles, instead, Arceus has players running about like an action roleplaying game, throwing primitive Poké Balls made of apricot and other materials, and avoiding the attacks of Alpha Pokémon. There are no forced battles, and save for areas that require certain navigation aids, it is your choice where to go and what to do.

The true hook lies in the Pokédex, which takes on more meaning than just a book of records. In order to increase one’s rank within the Galaxy Team for access to better gear and control of high-level Pokémon, research tasks need to be completed.

This could be capturing a certain number of the same creature, witnessing a specific attack, or even feeding it food. By completing these tasks, some more valuable than others, you can then up your research level for that particular beast and gain insightful information about their characteristics, location, weaknesses, and more.

Turn those research into Professor Laventon, and your rise is only inevitable. Of course, it would be too easy if every Pokémon is just waiting for you to throw a fruit ball at them, as some will gear up for a fight, sending dangerous attacks your way which can knock you out and cause you to lose items and progress. Others will run on sight and require a more subtle approach, either by stunning them with special items, or using tall grasses to get near these Pokémon.

When the need for battle arises, prepare your chosen Pokémon, and hurl them at your chosen foe. That familiar battle setup comes into play then, allowing your monster to go toe to toe with the wild variants.

It is also not always just a one versus one affair, attracting too much attention could also mean going up against multiple foes at once. Arceus also throws in Strong and Agile versions of moves, allowing you to either go for the kill at the cost of speed, or hit fast so you can have two turns instead of one. 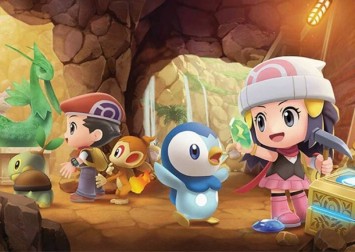 Then you have the Alphas, hulking versions of the monsters that are immensely more powerful, dangerous, and even more valuable additions to your team. Learning how to read their attack patterns, dodging at the right time, and picking your fight is not just how you progress in Pokémon Legends: Arceus, but also the way you will survive. Beat them and gain loads of experience points and vital items, or capture them for your dream team.

There are also space-time disruptions that can happen at any given time, blanketing an area with rare items and Pokémon that you might not be able to find readily. These will be some of the strongest opponents you will come up against, and they usually hunt in packs. Do your best to stay alive, and you can walk away with plenty of strong monsters and items.

Should you need a rest for your companions, switch out your party, or stock up on items for more adventures, every one of the five distinct biomes you will visit will have base camps that fulfil those functions.

Speaking of items, there is definitely more item management this time around. Materials can be found throughout the world, which creates opportunities for crafting on the go. Poké Balls, healing items, even food that can act as lures can all be created once you learn the required recipes. Between picking the right items to throw and the right Pokémon to deploy, this is a more hectic affair than one would expect normally.

While you can toil away at trying to fill the Pokédex, eventually, heading down the main narrative path will make you even more well prepared for more high-levelled beasts and areas. Rather than just battles that prove you are the best, which are usually reserved for important character moments or the hilarious cameos of the Miss Fortune bandit gang, Pokémon Legends: Arceus’ main obstacles are the frenzied noble Lords, gigantic Pokémon that have turned their backs on the people and become feral.

In order to quell their madness, players would have to throw balms made from their favourite food in order to calm them down. In between dodging painful attacks and throwing balms, there are also windows where you can send your best Pokémonto dish out some pain of your own, lengthening the window for the balms to take effect.

And as you continue this quest, more of the Hisui region opens up. You gain the ability to ride on various blessed Pokémon, making land, sea, and even air travel a possibility. Considering the distance one has to cover as well the time needed to catch a glimpse of every single Pokémonthat calls the region home, these are important tools to have.

Needless to say, the better you do, the more Pokémon Legends: Arceus can offer. Jubilife Village begins growing alongside your efforts, bringing in more requests for help that reward items and open up new options for clothing, hair, crafting, and more. There is even a photography studio for you to take adorable snaps with your favourite Pokémon.

Even after the conclusion of the drama surrounding the space-time rift, your time in Hisui is far from over. There are hidden wisps that need to be collected, Unown to hunt down, and legends waiting to be experienced in the endgame, and if you are truly after a satisfactory conclusion, especially one that involves the titular god-like Pokémon, these are all worthwhile activities to invest in.

That is not to say that the main story in Pokémon Legends: Arceus pales in comparison. In fact, it is one of the more engaging and intriguing ones in recent times. Combine that with an addictive gameplay loop that constantly rewards you for putting in the time and effort, and it is hard to go back to the base formula of trainer glory. Who knew that the series could have a new life with a more action-orientated take, and it is definitely for the best that this title exists, giving us a peek at what could be a new direction for a classic franchise.

Yet, being on the Nintendo Switch still carries some issues. The draw distance is not that great, especially when you are in the air or at sea, making Pokémon hard to spot. Textures are also hit and miss, with the stylized visuals looking much better on people and monsters, and less so for the world.

The controls can also be a problem, especially if you are playing on the Joy-Cons, if you are able, it is highly recommended that you enjoy the game on the big screen rather than as a portable experience.

Never has living amongst Pokémonbeen so fun and exciting, Pokémon Legends: Arceus feels like the open-world game that fans have always envisioned the series to be, breaking free of the shackles of hardware and design limitations to create a world that feels so alive.

This is a Pokémon game on a whole other level, and despite the changes, it has every shot of becoming the very best.

Pokémon Legends: Arceus will launch on the Nintendo Switch on Jan 28.

Great for newcomers, even better for fans, Pokémon Legends: Arceus represents a natural evolution for the series, and it is one hell of a ride from start to end.