If there's one thing beneficial about using the brand new Samsung Galaxy Z Flip 3, it would be the amount of compliments one gets with the phone in hand.

What's old has become new again and while consumers started with flip phones at the turn of the century, Samsung is upgrading the past and showing off how much of a difference a year makes since the release of the original last year.

Yes, despite the Flip 3 number in this year's release, there have only been two Z Flip devices - perhaps Samsung wants the number of this to match the Samsung Galaxy Z Fold 3 5G that launched at the same time.

As an early adopter of last year's experiment, the 2021 iteration is clearly superior.

When held in the hand, the phone is beautiful from all angles and is a topic starter the moment you place it on the table.

Packing in a 120Hz screen, a Qualcomm Snapdragon 888, 8GB of RAM, plus water resistance, the new Samsung Galaxy Z Flip 3 has all the benefits of modern smartphones and little drawbacks.

Considering it has everyone one would want, this new flip phone stands out easily from the crowd of slab designs which have been the norm for some time now.

In addition to sweetening the deal, the Samsung Galaxy Z Flip 3 is right up there with many flagship devices in the market right now.

Depending on where you reside, the phone starts from $1398 which makes it a compelling buy if you're looking to express your individuality.

Having used the Flip 3 for a few weeks now, the phone experience itself is really down to your own personal preferences.

Considering that it's pretty hard to open and close with one hand, Samsung has recognised that the design might not be for all and even offered a free trial on their previous flip phone.

One-handed operation-wise, nothing hasn't changed much with the Flip 3. But it's certainly a novelty that will appeal especially to the ladies.

When expanded, users will be able to enjoy a brilliant 6.7-inch display.

It's pretty much on par with most top-tier phones in the market right now so users will not lose much when it comes to real estate and still enjoy a large screen once expanded.

When placed into the pocket, there's really little chance for the Flip 3 to spill out as it sits pretty snug and safe. The only concern would be how thick it becomes, at 17mm when folded but it's simply a matter of getting used to it.

Effectively double the thickness of most mobile phones out there, the Flip 3 has a small gap between both halves when closed, much like the Z Fold 3.

Sadly even with the small groove, getting the phone open is a challenging affair with one hand. For the safety of the phone, it's really best to open and close it with two hands to avoid any spills.

While opening and closing (or flipping) the phone (with two hands) is generally smooth, the Samsung Galaxy Z Flip 3 projects an audible sliding sound if you're looking out for it.

It's akin to hearing two sheets of paper brushing against each other which is the sound of the hinge aiding the expansion and contraction of the device to fit the profile of the phone's form.

This might be the most concerning aspect of the device and it will be hard to tell how it will go the distance over time.

Thankfully, Samsung has made it easier to use the phone without opening it all the time by upgrading the front cover screen, which sits on the exterior of the Samsung Galaxy Z Flip.

With the new cover screen measuring in at 1.9 inches, it's a welcome upgrade as it makes more sense right now considering it's sufficiently large enough to read notifications but not big enough to operate for any meaningful actions such as replying texts.

For that, you'd need to rely on Samsung's own assistant, Bibxy, which is hardly ideal.

Users are able to access the camera, operate widgets, answer calls, directly without having to open up the phone.

Nonetheless, it's a welcome upgrade and it'll be cool to see how Samsung takes it to the next level in the next jump.

While small, Samsung has made the effort to make the cover screen as functional as possible.

Users are able to take pictures directly with the help of the cover screen and make full use of the rear camera's 12MP ultra-wide and wide-angle cameras.

When taking pictures, there's even an option to help your subject achieve better framing when the cover screen is turned on to help them get into position.

Apart from the default wallpapers, users are able to customise their cover screen to their preferred wallpaper as well for that added touch of personality.

For the most part, the main action takes place once the phone is flipped open and we've been spoiled with Samsung's AMOLED displays after all these years.

The screen looks great under bright sunlight and remains responsive to use though the crease in the middle of the phone does take a while to get used to.

Over an extended period of use and when viewed directly, the crease doesn't really feel and look noticeable which is a good thing.

Aiding the foldable display is a screen protector that comes default with the Samsung Galaxy Z Flip 3.

As we run our fingers across the screen protector, it feels significantly thicker and it's rather amazing how it will hold up over time given the frequent flexing.

Despite Samsung's assurances that the 2021 Flip 3 model is even more durable than the previous iterations, we'll really have to see how the phone fares after a significant and months of use.

Outside of folding the phone in half, there are not many apps right now that really make the most of the form.

Only YouTube has a cool feature where closing the screen slightly will have the video play on the upper half while you're able to read the comments in the bottom half. It's hardly a game-changer but it's something nice to have.

However, over time, you'd start to wonder why anyone would want to squint at the screen and view a smaller video frame. It's largely down to personal preference.

Cameras-wise, we're actually getting the same hardware from the previous generation's model.

As mentioned, we have the 12MP f1.8 wide and F2.2 ultra-wide-angle cameras on the rear (on the cover screen) and one 10MP F.24 selfie camera on the inside. 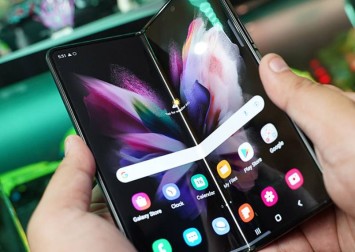 What really helps Samsung make the most out of aging hardware would be the software side of things.

If you're looking to put up content for the web, this is a good enough solution, just don't expect anything more.

In day-to-day use, the Samsung Galaxy Z Flip 3 does get rather hot especially if you're playing games on the phone or watching plenty of videos.

We suspect that due to its minute size, the heat dissipation might not be as efficient as other conventional models.

The aluminium frame does heat up fast and it can become uncomfortable to hold and especially so if you're out under the hot sun. It's not a deal-breaker per se but it can become rather noticeable after long periods of use.

The real Achilles heel with the  Samsung Galaxy Z Flip 3 has to be its battery life. The 3,300mAh battery can drain down pretty fast depending on how carefully you're managing the cover screen and from normal use.

Compared to previous  Android phones we've used, the battery life (or lack of) is shorter than most. Once the phone is taken off at 8am in the morning, you'd be racing for a charger at around 4pm.

This is under normal use with nothing too intensive outside of emails and texting.

Another aspect to note would be how reliant you are when it comes to NFC use.

In daily use, the NFC seems to be less sensitive compared to other phones.

Being able to tap to pay while on public transport or at the cashier seems to take a few significant seconds before both devices are able to register each other.

This is something to take note of to save yourself some public embarrassment but otherwise, with extended use, there seems to be a sweet spot to be found to guarantee success.

If you're looking for a mobile phone that is the perfect head turner and conversation starter, the  Samsung Galaxy Z Flip 3 is where it's at.

Price-wise, it's much more affordable at $1,398  this time around and makes a lot more sense now.

Size-wise, it'll be a hit with folks who don't want to have their phones weigh them down or have limited pocket space.

Outside of battery life and cameras, this is one mobile phone to truly set yourself apart from the crowd.

The foldable smartphone everyone can afford. The Samsung Galaxy Z Flip 3 5G is not quite perfect but we all know sacrifices have to be made to stand out from the pack. It's not deal-breaking but issues you might note over time.