What's with all the Area 51 (and ST Kinetics) memes invading your feed these days?

Aliens and Area 51 conspiracy theories are suddenly pop culture cool again, and you have memelords and s**tposters to thank for it.

If you’re confused why your feeds on Facebook, Twitter and Instagram are suddenly inundated with Area 51 memes (and think-pieces), worry not for the truth is right here. In the name of bizarre internet hilarity, over 1.3 million people confirmed their attendance to “storm” the highly-classified United States Air Force facility in Nevada come September 20. Meanwhile over a million others signalled that they’re just “Interested” in dropping by (pfft, weaklings).

This is, of course, highly unlikely. The joke Facebook event page “Storm Area 51, They Can’t Stop All of Us” was created at the start of the month for the lols, and the absurd description to “see them aliens” only bolstered its viral potency. There’s also the appropriately internet-y description of the event, which encourages folks to “naruto run” in order to dodge bullets. Which, if you must know, means dashing forward with your arms behind your back like the titular ninja in the anime series. As you do.

The ridiculous event then blew up beyond Facebook, with the Twitterverse getting onboard the fun by spreading around pictures, memes and links about Storm Area 51. There’s even a highly-detailed game plan that tasks attendees with roles, including rock-throwing, Naruto-running, and being Monster Energy-fuelled “Kyles”. Yes, deep cuts in internet humour.

Though I doubt that anyone would actually Naruto run into the military facility come September, the memes inspired by the joke are absolutely real and out of this world. Heck, even Lil Nas X dropped a music video about it.

the aliens at #Area51 waiting for the we outside text pic.twitter.com/3ZVywYKtg7

me and my alien from #Area51 after a few days pic.twitter.com/8rCLg84dKc

Even Singapore's own military memes page Memedef had to jump in. Albeit with ST Kinetics (the research and logistics company that does work for the Singapore Armed Forces) instead of Area 51.

Area 51 has always been a gold-mine for conspiracy theories thanks to the intense secrecy of the military base — it was only in 2013 that the Central Intelligence Agency actually acknowledged its existence. Alien enthusiasts have long speculated that the facility’s a base for experimental research and development, including tests on recovered alien technology and actual aliens. 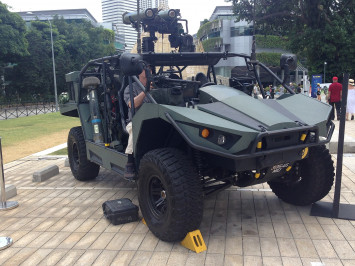 Of course, it’s all baloney (or is it?), and the folks participating definitely know not to take it seriously. “Hello US government, this is a joke, and I do not actually intend to go ahead with this plan,” wrote Jackson Barnes, the Facebook user who came up with the satirical plan of attack. “I just thought it would be funny and get me some thumbsy uppies on the internet.”

But for those who actually are serious about flying all the way to Nevada to storm Area 51 together, please don’t. Speaking to The Washington Post, US Air Force spokesperson Laura McAndrews asserted that the air force “always stands ready to protect America and its assets.”

“[Area 51] is an open training range for the U.S. Air Force, and we would discourage anyone from trying to come into the area where we train American armed forces.”

Nonetheless, there’s a two-month span between now and September 20 — ample time for the military to get their Energon turrets and Tesla coil guns ready to fend off shinobis and drywall-punching Kyles from saving the alien prisoners.