Lee Min-ho breaks his three-year hiatus with the new K-drama The King: Eternal Monarch on Netflix.

Have you been watching the latest blockbuster Korean drama The King: Eternal Monarch? The fantasy drama premiered on Netflix on April 17 and is South Korean actor Lee Min-ho's comeback drama after he completed his military service.

It's also his reunion with renowned screenwriter Kim Eun Sook (of Descendants of the Sun, Goblin and Mr. Sunshine fame) who worked with him on The Heirs in 2013.

Whether you are a diehard fan who fell in love with Min-ho as Gu Jun-pyo in Boys Over Flowers, or a new fan watching him act for the first time, here are ten things to know about this dreamy heartthrob.

Min-ho was involved in a tragic car accident in 2006 when he was 19. He was on a car trip with fellow actor Jung Il-woo and two other friends when a car from the opposite lane crashed into them head-on.

The two actors were the only survivors and both of them suffered severe injuries. Min-ho was in a coma for a month and had to stay in the hospital for nearly a year. He even had to insert a 46cm metal plate in his thigh for three years.

In 2011, he got into another car accident on the set of City Hunter. Although the front of the car was wrecked after it crashed into a stationary truck, miraculously he only sustained minor injuries and resumed filming shortly after.

Due to the severity of his previous injuries, Min-ho was deemed to be unfit for combat duties after undergoing a physical examination.

He was unable to serve as an active duty soldier and became a public service worker at the Suseo Social Welfare Centre in Gangnam, Seoul.

However, he was still able to wear the military uniform after going through four weeks of basic military training during his public service duty.

On his final day of service, the media and hundreds of fans showed up with balloons and banners to welcome him back to civilian life.

He is big on giving back to society

Min-ho has received a lot of love from the public and he makes sure to give back as well. 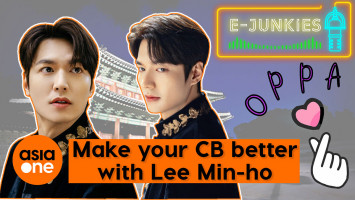 He set up fund-raising platform PROMIZ in 2014 to raise awareness and encourage donations for humanitarian and social causes. PROMIZ is a combination of the word 'promise', his name, and his official fan club name 'MINOZ'.

Working together with partners like World Wide Fund for Nature (WWF) and The United Nation's Children Fund (UNICEF), over the years, the platform has contributed to several causes such as donating to underprivileged children, preserving endangered species, and constructing wells in Malawi.

Min-ho also made a donation of 100 million won (S$120,000) under his fan club’s name to UNICEF’s Nepal earthquake relief fund in 2015. For his contribution to society, Min-ho received the ‘Sharing Happiness Award’ in 2016 from the Ministry of Health and Welfare.

He once had a stage name

When he made his debut, his agency thought that his birth name was too ordinary and gave him the stage name Lee Min.

Unfortunately (or fortunately), the pronunciation and characters of the name were the same as the Korean word imin or immigration and resulted in poor internet search results for him. He eventually reverted to his own name after two years.

He aspired to be a football player

Min-ho didn't always dream of becoming a celebrity. When he was a kid, his mother wanted him to build up his physical strength and signed him up for football lessons with famous Korean national player, Cha Bum Kum.

During the four years of training, he displayed a talent for the sport and even thought of enrolling into a middle school where he could specialise in football. However, his football aspirations ended after he broke his arm in a match in the fifth grade of elementary school.

ALSO READ: Lee Min-ho returns after military service with The King: Eternal Monarch: 'My second chapter as an actor is starting now'

As a testament to his immense popularity in China, in 2014, Min-ho was invited to perform on Chinese network CCTV’s Lunar New Year Gala, the most-watched show in China during Lunar New Year.

An estimated 700 million viewers tuned in to watch Min-ho sing the theme song of Boys Over Flowers with Taiwanese singer Harlem Yu. His performance, which had a mixture of Korean and Mandarin, marked the first time the Korean language was broadcasted on the show.

Min-ho enjoys gaming so much that he once said that he would be a pro gamer or work for a game company if he didn't become an actor.

He is known for his expertise in multiplayer online battle arena game League of Legends (LOL), which he plays together with Kim Hee-chul from Super Junior.

When Hee-chul was asked about which celebrities were the best at playing LOL on talk show Radio Star, he put himself at the top and named Min-ho as his gaming rival.

He further revealed that they tend to fight a lot when they play the game with their mics on but are still close friends.

He loves his dog

Min-ho is known for his love towards his pet, an adopted miniature pinscher named Choco. He can be seen cuddling and playing with Choco in various videos, and she makes frequent appearances on his social media dressed in adorable outfits.

He once said that thanks to his fans, Choco has more clothes than him. His fan club even gifted her a delicate pearl necklace which she has been spotted wearing.

When former 2NE1 member Sandara Park was chosen to represent beer brand Cass 2X, the promotional activities were accompanied by a music video.

Titled “Kiss”, the song was Sandara's only solo track and it gained widespread attention for their kiss scene which became one of the most famous events in 2009.

She revealed on variety show Seoulmate 2 that they had to kiss for 50 times because as a rookie, she wasn’t able to really feel the kiss when there were so many people around them.

Min-ho broke another record by being the first male celebrity to grace the cover of Cosmopolitan Korea magazine to commemorate their 200th issue.

Although there have been other male celebrities who have been on the cover in the past, they were usually accompanied by a female model or were in a group.

With his smouldering good looks, he looked every bit the stunning runway model as he modelled the latest trends in the stylish and chic photoshoot.