4 years in the making? Wang Leehom and wife reportedly planned to divorce in 2017

Following news of Wang Leehom's divorce from wife Li Jinglei after eight years of marriage, the internet has been rife with speculation as to what could have caused the rift as well as when exactly did their marriage fall apart.

In a Facebook post on Wednesday (Dec 15) confirming the split, Leehom, 45, admitted that he regretted "not doing well enough in many areas" and stated that their separation was due to "different plans on how we want to lead our lives".

According to Mirror Media, the couple who got married in 2013 and are parents to two girls aged seven and five, and a three-year-old boy, were close to divorce years ago in 2017.

However, the plan was shelved after Jinglei fell pregnant with their third child.

Soon after the divorce announcement was made, photos that the couple had posted on social media in the past were subject to scrutiny by netizens eager to spot signs of cracks in their marriage.

Some noticed that they had not posted any photos of themselves as a couple since April 2019, although Jinglei dedicated a post to Leehom for Father's Day in June that year.

One photo in particular which caught the attention of netizens saw Jinglei, 35, posing at a gathering with Taiwanese celebrity friends Ariel Lin, Janet Hsieh and Janine Chang.

Eagle-eyed netizens claimed that the photos, posted in February this year, already show Jinglei without her wedding band.

In photos that Jinglei shared in 2020, however, she is still wearing her ring, although netizens observed minimal interaction between her and Leehom.

This, coupled with an ominous-sounding message she posted that same year which translates to "the journey is the final destination", were taken as warning signs that all was not well in paradise.

Rumours of trouble in their marriage surfaced again in June this year but Leehom's manager had refuted the claims, adding: "They still interact on Instagram and 'like' each others' post." 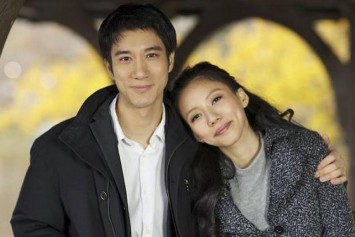 Another sign? When Leehom returned to Taiwan from the US in September and was caught breaching Covid-19 rules at a gathering with fellow celebrities, netizens noticed that Jinglei was nowhere to be seen.

But the rumour mill went into overdrive in November, with Leehom reportedly confiding in friends on the dissolution of their marriage.

Citing sources, media outlets reported that Jinglei's involvement in managing Leehom's career could have contributed to the breakup. This may have led to a "power struggle" between herself and Leehom's mother.

After their divorce was announced, Jinglei's social media account was reportedly inundated with comments from heartbroken fans such as, "Can you reconcile with Leehom? I really like you guys a lot", "Your divorce has made fans heartbroken," and "Appreciate your sacrifice all these years".

There is also speculation as to how Leehom's assets will be divided.

Four years ago, Leehom reportedly bought a 12-storey mansion worth NT$400 million (S$19.6 million), but the piece of property is said to have been purchased under his company, which is managed by his mother.