7 years on, Singapore TikToker reminisces 'accomplishment' of getting hugged by BigBang concert mascot, who was actually Taeyang in disguise

A fan got lucky when she was hugged by BigBang's Taeyang dressed in a mascot suit seven years ago.

Like a scene straight out of a K-drama, a woman in Singapore was hugged by her K-pop idol Taeyang from BigBang while he was incognito seven years ago.

In a TikTok post earlier this month, she uploaded video footage of the incident, which showed her in a concert venue here and walking away from someone in a monkey mascot suit. However, the mascot followed her around, hugging her.

The video footage then cuts to another location showing Taeyang in the suit with the headgear removed.

"Note to self (and all fans out there) to not ignore any mascots at concerts," TikTok user Liyan, 26, wrote on her post.

Explaining her decision to post it now, Liyan, who works in human resources, told AsiaOne: "I wanted to post something on my TikTok account… and thought of posting about this thrilling experience."

And this "thrilling experience" certainly made for a very significant memory — besides being hugged by her idol, she was also featured in the boy band's 2016 documentary film BigBang Made.

But this wasn't all just sheer luck. Her encounter with Taeyang required some groundwork and dedication. 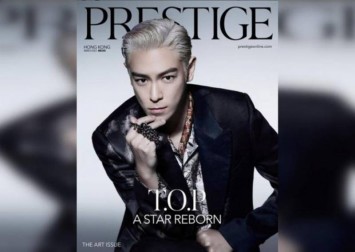 "I watched BigBang's tour reports for other countries before they made their stop in Singapore (in 2015). There was once when Taeyang dressed up as a rabbit mascot in China," Liyan said to AsiaOne.

"When I spotted the monkey mascot, I had a hunch that it was one of the members from the boy band and I immediately went to it to request for a photograph. But it started following me around and I felt really nervous and overwhelmed [thinking] that it was a BigBang member."

Because of her nervousness, she walked away from the mascot.

Her hunch proved to be accurate when she later watched the BigBang tour report for Singapore that was uploaded to their official YouTube channel.

In the report, Taeyang slips on the headgear of the monkey mascot suit before heading out to meet, hug and high-five fans.

While Liyan wasn't featured in the report, she was in the 2016 documentary film BigBang Made, which showed the scene of her with the suited-up Taeyang.

Said Liyan: "I caught the movie in theatres and was really surprised to see myself in it, and I also felt emotional because I've been a big fan of BigBang ever since 2012.

"So getting a short snippet of my fangirl moment in a movie together with BigBang was definitely an accomplishment for me as a VIP!"

Fans of BigBang are referred to as "VIPs".

When asked if she is still a fan of the group, she proclaimed happily: "Yes, I'm still a VIP!"