After 28 years, Ryan Lian reunited with brother given away at birth, all because of TV variety show

Left: Ryan Lian. Right: Ryan with his younger brother Kevin Soh, who was given up for adoption as a baby.

Ryan Lian may be a familiar face to local viewers, but few would know of the actor's private family drama.

The 36-year-old, who was in Jack Neo's Long Long Time Ago and Ah Boys To Men 4, had in fact reunited with his long-lost younger brother in 2014, after being apart for 28 years.

He had kept it under wraps until recently, mostly to protect the privacy of his younger brother.

In an interview with Shin Min Daily News on Tuesday (Sept 14), the pair shared their journey of finding each other and how they navigated their relationship from strangers to brothers.

His brother Kevin Soh, who's a year younger than Ryan, was given away to another family soon after he was born. In return, their parents received a red packet.

The 35-year-old graduated from Nanyang Technological University with a degree in mechanical engineering. After entering the workforce, Kevin handled publicity for a movie company before successfully venturing into marketing.

Ryan, on the other hand, was raised by his maternal grandmother for most of his life. With a keen interest in martial arts since young, he became a wushu instructor before stepping into the entertainment industry. He worked as a calefare for 16 years before making a name for himself in a series of movies.

Due to the pandemic and the lack of acting jobs, he recently turned to selling items on livestreams. He admitted that money is tight after breaking his right hand in July, and worried about the medical bills.

According to the Chinese evening daily, if Ryan's life is akin to being on a roller coaster, then Kevin's could only be described as a "through-train" with few obstacles.

"Ryan says I'm lucky to have been sent away!" said Kevin, who's married with kids.

Reunited all because of a TV variety show

Their reunion took place at a hotel here and the pair chatted for a very long time.

Kevin described how he was 18 when he found out he had an older brother.

"Ryan came to look for me at my home and through the gate, I saw a young man standing outside. My mum had just returned home, and I heard her say, 'No, don't find him'."

Suspicious, he subsequently found out the truth of his adoption, and Kevin ended up not speaking to his adoptive mother for two weeks.

Ryan recalled: "At the time, I just wanted to see him to find out if he was a gangster or a studious boy. After I confirmed that it was the latter, I promised his mother that I wouldn't disturb them."

He kept his word, until fate led to their paths crossing again several years later, when Kevin signed up to be a participant on the Mediacorp variety talkshow Smart at Work.

There, he met local actor-comedian Jaspers Lai, who immediately commented on his uncanny resemblance to Ryan.

With his curiosity piqued, Kevin dropped Ryan a message on Facebook. He failed to get a response from Ryan for some time, but not because the latter was not willing to talk.

In truth, Kevin's message laid buried as Ryan did not have a habit of checking his inbox. One night however, Ryan finally stumbled across the note.

He described being stunned yet excited. "My brother finally wanted to acknowledge me!" he described, laughing.

Said Kevin: "Before we met, I was happy yet scared. Although we were related by blood, we also did not really know each other."

Kevin recalled a period of time when he was reluctant to bring up his past and held a grudge against his birth parents for giving him away and also his maternal grandmother for approving the adoption.

But with their grandmother currently staying in a nursing home due to dementia, it was a case of letting bygones be bygones. Kevin told Ryan that he would be happy to visit the elderly woman.

Ryan, who is extremely close to his grandma, remembered weeping tears of joy.

Kevin hopes that his experience would encourage others who are adopted. "Your adoptive parents are actually more amazing than your birth parents," he said, adding that those who are adopted should focus on the brighter side of life instead of dwelling on their past.

Ryan, on the other hand, hopes parents would be more responsible towards their children. "If you want to acknowledge them when they're older, it would be too late and you'll regret it," he shared.

When Kevin got married, Ryan was the emcee at his wedding. 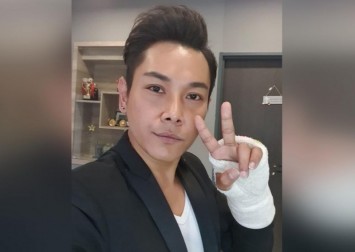 Kevin joked that when Ryan marries his Malaysian girlfriend with whom he's in a stable relationship, he would help the couple do a "livestream wedding".

He commented that while Ryan may look like a typical Ah Beng, he's actually a warm-hearted person who understands the importance of gratitude and is diligent in his work.

However, Kevin noted that his older brother is not very sociable, which puts him at a disadvantage in the entertainment industry.

Ryan naturally had only kind words to say about his younger brother. "He's capable and hardworking. While he used to be very stubborn and hung up on his past, he has changed a lot since becoming a father."

Added Kevin: "I've let go (of my past) and don't harbour any grudges. It might have been a choice that my birth parents had to make, but since they chose to give me up, I won't intentionally think about looking for them now."