Aloysius Pang's tribute at Star Awards 2019 left some people feeling disappointed. What do you think?

The organisers of the Star Awards were tight-lipped when asked if they had plans for a tribute to the late Aloysius Pang, though everyone knew it was a foregone conclusion.

The talented young star passed away earlier this year in a shocking accident during an overseas military exercise; his premature departure sent ripples throughout the local entertainment industry and the country.

It was even reported that hundreds turned up at his wake to pay their last respects.

What transpired last night (April 14) was a surprisingly modest and quiet tribute as a video montage made from clips of his childhood photos, his directorial endeavours, and fan interaction was aired. 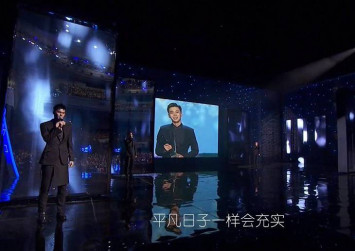 That video was also accompanied by a cover of Voices From The Heart performed by his colleagues at Noontalk Media - Xu Bin, Timothee Yap, Zong Zi Jie and Gavin Teo.

To top it all off, the performance was bookended by Aloysius' singing.

Those in attendance seemed to have been overwhelmed with emotions as the camera caught Aloysius' friends Ian Fang and Chen Shucheng, including his girlfriend Jayley Woo, tearing up.

However, viewers seemed to disagree with the treatment of the In Memoriam segment and questioned why there wasn't more that was done to honour his memory apart from a performance that lasted slightly longer than two minutes.

Some eagle-eyed viewers also spotted Aloysius' brothers in the audience and expected some kind of posthumous award to be given out but were sorely disappointed by the end of the show.

According to a report on Shin Min Daily News, viewers took to social media to air their grievances which could be summarised as follows:

1) Why were his brothers invited when Aloysius wasn't given any awards?

2) The segment appeared to be hastily executed, sparking comments that Mediacorp seemed to be forgetting Aloysius as he's been gone for a while.

3) Commenters were curious to know if the segment was glossed over because organisers didn't want to dampen the mood at the event, which marked the 25th anniversary of the Awards.

4) Why was a cover of Voices From The Heart chosen for the tribute instead of Aloysius' single Black Tears? Why were all of his close friends not invited on stage to participate in the performance?

EXPRESSING APPRECIATION IN A DIFFERENT WAY

When asked if the segment was too short, it was reported that Aloysius' mentor, Dasmond Koh, said: "I don't think so. It's more important for us to express our appreciation for everyone's support in a different way.

"That's why they chose a slightly uptempo, and not so melancholic interpretation of the song. I'm very thankful to the production team for rearranging and re-recording the song."

According to a recent interview, Dasmond revealed that Aloysius actually recorded his version of the song that was not released and they gave it to the Star Awards' production team for the tribute.

According to the executive producer of the show, Elaine See, the production team prepared the tribute together with Dasmond and the process took almost two months.

She told Shin Min Daily News: "We had a lot of discussions and thought about how we would remember him.

"As Aloysius is a very positive and optimistic person with an upbeat personality, he wouldn't like a moody atmosphere for his tribute.

"Because of this, we didn't want the tribute to feel too solemn."

As for the posthumous award, Elaine explained that the decision wasn't "intentional" and it was different from the circumstances surrounding Huang Wenyong - a veteran actor who died from cancer shortly before the Star Awards 2013.

She said: "He received an award because he was already nominated but he passed away before the ceremony."

With regard to the length of the tribute, Elaine pointed out that duration of the song was originally quite short but they had already extended it to include clips of Aloysius' trip to Japan in the video.

AsiaOne had also reached out to Mediacorp for further comments but they were unable to provide a response at the time of publication.

Having watched the ceremony live as part of our Star Awards Watch Party, the AsiaOne team felt that the tribute was rather well-organised.

It was a quiet, tender, and heartwarming moment that definitely worked for the crowd and the ceremony.

Why the duration bothered some viewers is still a mystery as we were immersed in the moment and time, frankly, did not matter.

Perhaps there is something to be said about having Aloysius' brothers play a more active role in the tribute by giving a speech, or even inviting those close to him onstage.

However, that would be dependent on whether they're even agreeable to it. After all, there are many different ways to grieve and some may choose to do so privately.

In fact, we think that if the duration were to be intentionally lengthened or if there was a more ostentatious treatment of the tribute, it would actually come across more patronising to the fans, his friends and his family.

Sometimes, a quiet and subtle moment works, and it is our opinion that this was a good way to remember him.