The model and social media influencer told Barcroft TV that he first got to know about BTS when he was living in South Korea in 2013 and was immediately infatuated with the group. The seven-member boyband and K-pop phenomenon has attracted many fans around the world, earning their spot as one of the most successful K-pop acts to date. Since London's discovery, he's coveted the lavish lifestyle of band member Jimin, who was named one of the top 100 most handsome celebrities in the world last year, and has been the victim of death threats. 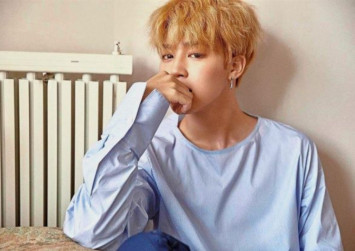 To look like his idol, London has spent thousands buying the same clothes and undergoing numerous cosmetic procedures.

These include four rhinoplasties, removing fatty tissues from his chest, as well as getting an eyelid surgery in an attempt to make his eyes look as close as possible to "Korean eyes".

While he stresses that he does not want to change his ethnicity and only wants "to look like a K-pop star, and they happen to be Korean", his friends have shown concern for London's impulsive habits. Oli shows a photo of him before the surgery. Photo: Youtube/Barcroft TV

"I don't ever want to picture you like this pop star, to be honest," says London's close friend Stephanie Jackson, in the interview with Barcroft TV.

And he's not done yet. London still has plans to undergo more surgeries in pursuit of his definition of perfection.