In a shocking reveal last Friday (May 8), Taiwanese-American doctor Michael Lai admitted that he has separated from Hong Kong singer-actress Gillian Chung after less than two years because she doesn't love him anymore.

While Gillian, 39, has kept mum on the subject — apart from a statement that the couple still respect each other, and that she'll not be replying to questions about her marriage — Lai, 30, continued talking about their relationship and separation in public.

However, it seems that his tell-all days are over as Lai has reportedly been served a 'reminder' by Gillian's lawyers to stop discussing their marriage.

In a lengthy Instagram post published on Friday, he reminisced about their relationship, courtship, the many places they've travelled to, and the numerous concerts of hers that he attended.

He wrote: "Looking back at 2018, you suddenly became cold (towards me) after our pre-wedding party in Los Angeles. I asked you why, and you told me that you have regrets, you didn't love me that much, and you felt you are not suited for marriage. We discussed for a long time, and decided to work hard (at our marriage) together.

"In March, you called and told me, 'Sorry, I thought I would slowly grow to love you after getting married but I really can't'. I thought you were kidding until I received the signed separation agreement that you mailed over. I was sad, angry, devastated, but now I've accepted reality.

"This is life and while I can't get over it now, I'm thankful that you're honest with your feelings so we can start heading towards different futures. It's been so long since we've communicated but I think you're probably as sad as me." 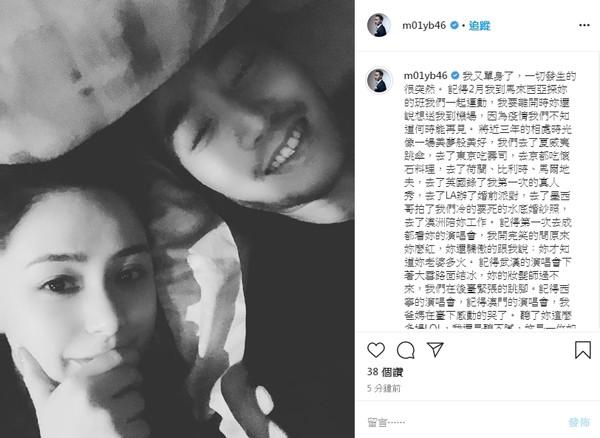 Gillian's manager told the media that one of the terms in the separation papers is that both Gillian and Lai must keep mum about their marriage and separation agreement during their time apart.

Lai has broken the agreement, and her management agency is reportedly displeased with him for revealing so much about the couple's personal memories and issues.

Gillian's manager also added, they only signed a separation agreement and they have yet to be formally divorced. The hope was that the couple would spend the next few months to calm down, rebuild their relationship, and save their marriage.

Both parties had also originally agreed to take the next few months to assess the situation before making a formal announcement together.

While their relationship saga unfolded, a Chinese influencer levelled some serious accusations against Lai on her Facebook post. The influencer claimed that she's heard things about Lai from a mutual friend, such as how he enjoys cheating on his partner, brings different women home even after marriage, and has "obvious ambitions".

In response to the allegations, Lai told Taiwanese media that he intends to sue her, but the influencer stands by her claims and expressed her intention to fight Lai with her team of lawyers.

Before meeting Gillian, Lai was married once before in 2016 and his first marriage lasted six months.