It was a day for romantic declarations, celebrities included.

In what may come as a surprise to many, local actress Carrie Wong expressed her love for her boyfriend, otherwise known as Boris Lin, based off his Instagram handle. Last we read, the 25-year-old had revealed she was single, and looking.

Carrie wrote in the caption: "The courage you gave me is what allows me to be strong for you. Happy Valentine's Day my love." However, it was a case of now you see it, now you don't, as the post was found to have been deleted overnight.

On Friday morning as well, her boyfriend's account was found to have been privatised.

But not before we managed to get a screengrab of his Valentine's Day message to her. The actress had declared in an interview with 8days in January last year that she was going on a two-month sabbatical in February and March, where she said she may live in Taiwan or China for a while.

Could her boyfriend be the reason, or did she first meet him there? Interestingly enough, a report that surfaced at the time had insinuated that she was taking a break to find a boyfriend, an allegation she denied in the interview. 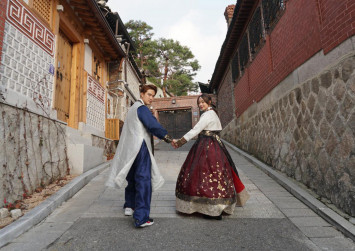 Not much is known about Boris, but he appears to be Taiwanese. Here's what else we gleaned after some online sleuthing:

The couple is believed to been together for at least half a year, since he first posted a photo of themselves in June last year.

The equally lanky (Carrie is 1.74m while he's reported to be 1.82m) and boyish-looking lad appears to have some modelling experience as well, participating in a competition in Taiwan way back in 2014.

We're not sure why they decided to take their relationship back underground since we believe love should be celebrated, but we're happy for them anyway!