'Caught a wild Joey Wong': Former Hong Kong actress seen on stage in Canada, but this time for Buddhism

Joey Wong was spotted (fourth from the left) at a Buddhist meeting in Vancouver, Canada, where she finally took the stage once more, this time wearing a simple navy blue shirt and grey pair of long pants.

Despite the almost two decades' worth of retirement, she can't hide her stage presence.

Hong Kong cinema legend Joey Wong was spotted by Vancouver media at a dharma meeting in the Canadian city that took place a few days prior.

Joey, 55, was pictured among a group of participants on stage, humming along in the Buddhist conference in images shared on Xiaohongshu captioned 'caught a wild Joey Wong', reported Zaobao yesterday (June 22).

In them, she can be seen donning a navy blue shirt and a beige mask on her face, as well as a grey pair of long pants. With her long hair let down, she sported a humble appearance.

Holding a lotus lantern in her hands, the retired actress swayed her body gently with the music as she continued to hum and sing.

According to people that attended the Buddhist meeting, Joey was very approachable and even helped to clean up after the event concluded.

Read Also
Heartbroken and 'slandered': Christine Ng reveals what happened to her after husband of 13 days died 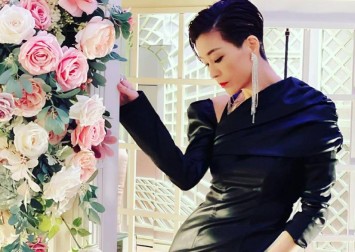 The actress had retired from the limelight back in 2004, choosing instead to focus on practicing Buddhism after moving to Canada.

In Vancouver, she consistently drops by the local branch of Lingyan Mountain Temple to practice Buddhism and can also be found organising or participating in various Buddhist meetings.

However, not all netizens have been kind to this retired goddess of Hong Kong cinema.

In April this year, footage of her enjoying a hotpot meal in Canada became the subject of much debate as netizens derided her appearance, claiming that she looked "old", "ugly" and even "like a normal person".

Upset by the utter disrespect and uncalled for ridicule, Taiwanese showbiz personality Denny Tsao stepped in to defend her image.

"She has already retired for so many years and has nothing to do with the showbiz industry," Denny wrote on Facebook. "She's just living her life. Why do people have to call her old, fat and ugly? What do you all want?"

Prior to this, she also stumbled upon a spot of trouble when a controversial Instagram account under her name posted the medal count for China, Hong Kong and Taiwan at the 2021 Tokyo Olympics.

She has since clarified that the account is fake, and may even take legal action against the creator of it, Today reported in August last year.

READ ALSO: 'Don't treat her like this': Ex-pop idol defends 'goddess' Joey Wong after she's criticised for looking like 'a normal person'