Cynthia Koh fulfils promise to 'not wear anything' if she won at Star Awards... or does she?

Cynthia attempted to make good on her word.

Cynthia Koh is not one to break a promise.

The veteran actress had stated at a press conference before the Star Awards this year that if she won a place among the Top 10 Most Popular Female Artistes, "maybe she won't wear anything this year".

Well, win she did. Many may be surprised to learn that it is only her third Top 10 Most Popular award so far in a career spanning 30 years.

And in return, Cynthia attempted to make good on her word.

In a post on Instagram on Saturday (April 30), Cynthia wrote that the Awards show held last Sunday was "a night to remember".

"I know I promised everyone that if I win, I won't wear anything. Scroll to the last picture."

She joked: "If you are under 18, please seek parental guidance."

Titillating as it sounds, turns out the final picture in the carousel was simply a cute photo of Cynthia as a baby, sitting butt-naked in a tub.

Not that we were really expecting her to one-up her s(k)intillating show of flesh last year that's seared in our memory.

Who could forget that figure-hugging blue gown she wore to the Asian Academy Creative Awards last December?

The controversial dress showed off the 48-year-old's ample curves and even drew flak from haters who slammed her for "not dressing her age". 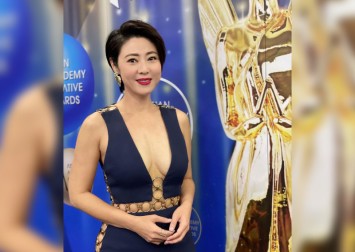 Asked at the pre-awards press conference if she would be wearing something "equally explosive" this year, Cynthia coyly stated that "no, I'll have to cover it up".

That was when she made the comment that she'll "not wear anything" if she got more votes, to which the astonished host exclaimed, "Is this your strategy?"

At a backstage interview with AsiaOne at Star Awards held last Sunday, Cynthia shared more about the thought process behind selecting her iridescent and decidedly more conservative Moschino gown this year.

"Because you all have an expectation that I'll have some 'curves' for you guys so I decided to cover it up a little bit so next year I'll reveal some more".

She teased: "I can't always reveal for you guys. Otherwise, what else is there left to see?"