The 47-year-old actor tied the knot with Lauren Hashian, 35, in Hawaii in August and admitted he was hesitant to wed for a second time following his split from Dany Garcia over a decade ago.

He told WSJ. Magazine: "My divorce did a number on me. I wasn't fearful of getting married again, there was just some hesitancy. But Lauren was incredibly patient: 'I love you, you love me, we have this amazing life together, no presh.'"

Although Dwayne and Dany - who have daughter Simone, 18, together - didn't divorce until 2008, they split up some time before and when Dwayne met Lauren he was instantly smitten.

He said: "Within 30 seconds, I thought, 'Wow, this girl's stunning.' At the time, I was going through my breakup with Dany and [Hashian] was just coming off a big breakup, too. Ironically, when you're not looking for something, the power of the universe kind of takes over."

Dwayne and Lauren went on to have two daughters, Jasmine and Tiana Gia, together and he previously spoke about how "lucky" he felt to have found love again with Lauren.

He said: "I was so fortunate to have fallen in love once. To fall in love again? That's a hard thing to do twice in the position I'm in. I'm one lucky son of a b****."

Dany has worked as Dwayne's manager since 2008 and the pair are still close.

She previously told Marie Claire US: "We knew that we were moving into that period of our lives, the closing of a personal relationship. I was already deeply involved with his agents, I was already commenting on scripts. It was a very natural conversation, where he just said to me, 'I would love for you to do this full-time.' 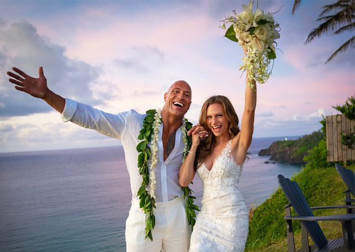 "Some people go through separation and there's no conversation, and it's a dark time, and one person goes off, but that was never us. We went on this journey together. We were going to change the manner of the relationship together. We spoke every day, and multiple times a day--not only on business, but on what was happening personally.

"We spent over a year looking at the things that didn't work in our marriage, the reasons why, making sure those elements had been cleared and taken care of, and that we had a real understanding of respect. We gave ourselves room to know that there may be emotional freak-outs as new people come into our lives.

"We were like, 'Okay, we're human, so we're going to work through that.' But if you have this agreement that no one is going to leave the table, suddenly you can tackle everything."